Hey, look at me, being all alive & stuff! I kind of fell off the face of the Earth for a while. Ramona started kindergarten at the end of August & it was a far more challenging transition than I anticipated. There’s been a lot of bullying & some issues with school administration. I don’t really want to go into all the details in a public-ish forum like this, but suffice to say, taking care of Ramona has being eating up a lot of my physical & emotional energy recently. Obviously I have hours everyday when she is at school (like right now!), but it hasn’t been the blissful, productive idyll for which I’d hoped. Oh well. 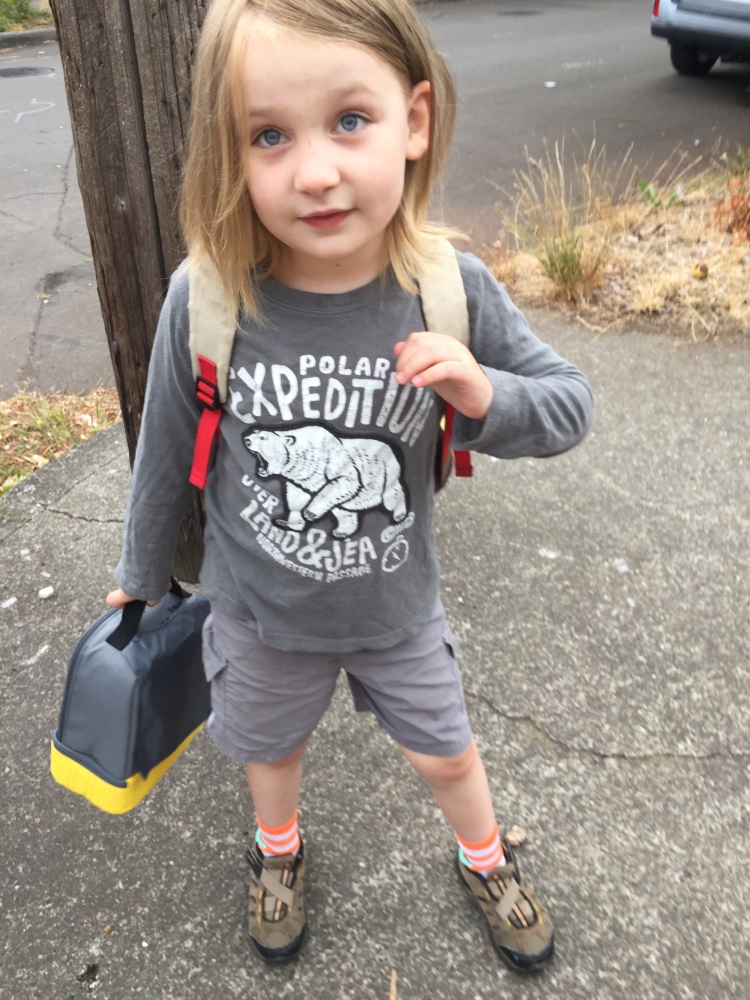 Ramona on her first day of school!

Accordingly, I didn’t get a ton of sewing done in September. In fact, I had a good solid ten days when I was having some kind of weird anxiety attack & was too freaked out to even go to the studio at all. I didn’t do nothing. I got a lot of cross stitching done during that time. But the cross stitch projects I do are so complex, I’d only be updating this blog like twice a year if that’s all I ever wrote about here. …Wait a minute…I kind of only update here twice a year anyway…

I made some curtains for the house, but I think the only other sewing project I actually finished in September was a dress commission for my friend Alex. She was going to be in a wedding party & needed a black dress, but she was having trouble finding something off the rack that fit properly, both physically & aesthetically. So I offered my services.

Alex sent me a bunch of different images of the style she was after–kind of a lagenlook thing. She definitely wanted a drape-y cowl situation, but she also wanted a relatively fitted bodice, & an above-the-knee skirt length, since she is pretty short. This is the kind of challenge I really enjoy. It’s why I took up sewing in the first place, really. Because so often, there is a mismatch between what a person wants to wear & what is available for them to buy in ready-to-wear. Alex is a small person who wants to wear witchy, asymmetrical layers, but she doesn’t want to look like a walking laundry pile. That means these layers & proportions need to be scaled properly for her. Fun!

Based on what she showed me, I gave her an assortment of pattern options. She chose Vogue 9112, a Marcy Tilton design. She liked the interesting collar, the draping, & the sleevelessness. It’s a really interesting pattern. It’s seventeen different pieces, with only the pocket bags & armscye bindings being the same as any others. It’s mostly extremely convex curves being sewn to very concave curves, with some gathering on a few pieces & a bit of pleating on the collar. 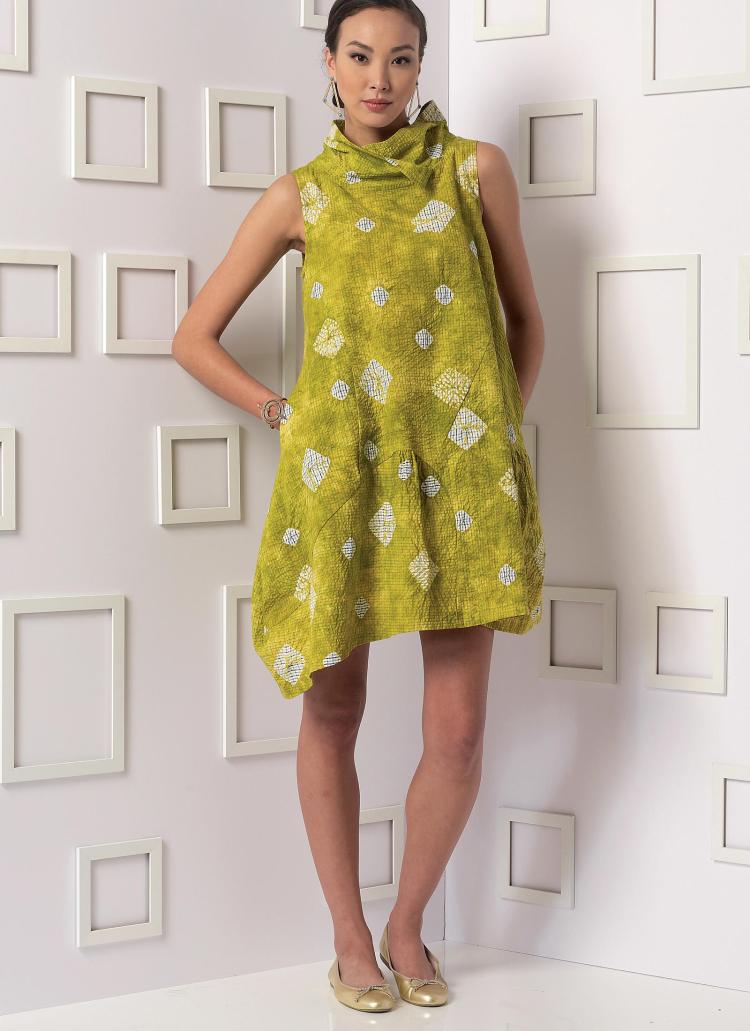 We went on a field trip to the Mill End store to choose fabric. Alex settled on a black wool suiting with subtle shimmery silve pinstripes. I wasn’t thrilled, because I’m allergic to wool & I knew my hands were going to be an itchy mess the whole time I worked on the dress. But it was an excellent fabric choice for the occasion & it worked really well with the design.

I took great care to cut accurately & on-grain, & carefully marked each pattern piece. My precision in prep combined with the excellent drafting made the whole thing a joy to sew.It could have been an absolute nightmare, but careful staystitching & plenty of experience sewing curves (thanks to all the bramaking I do) helped me construct everything without a single pucker & without having to rip out any seams. The fabric ravelled like crazy, & even with steam, it didn’t hold a press very well. I briefly considered topstitching the seamlines to flatten them out more easily, but I was making the dress for a wedding & topstitching has a casual vibe, in my eyes. So I just used lots & lots & lots of steam & exercised a lot more patience than I probably would have had I been making the dress for myself, & I got there in the end. 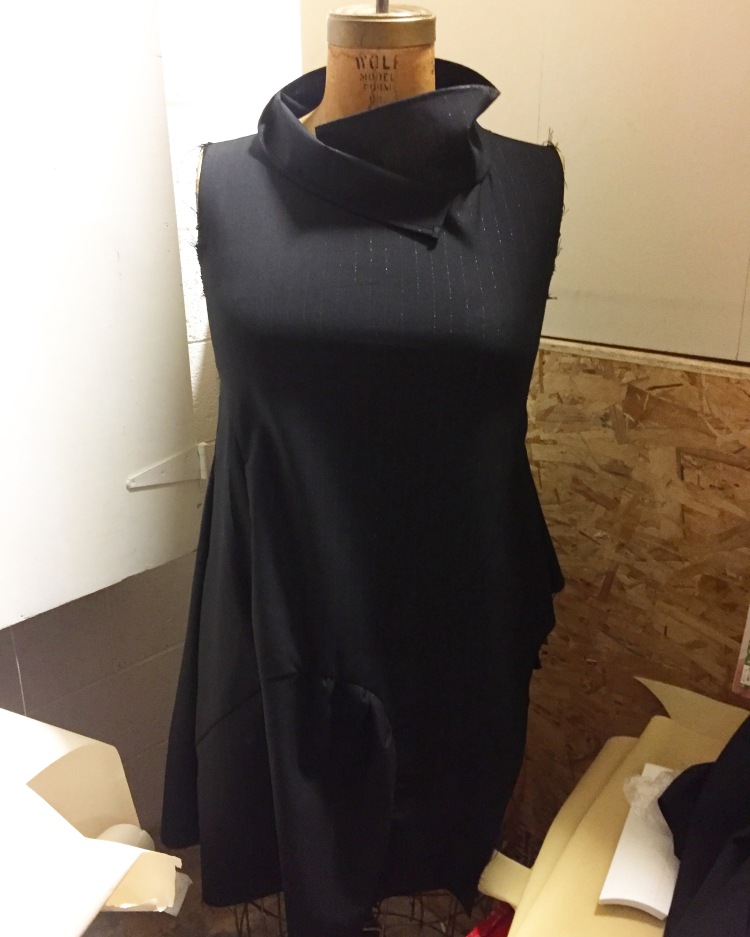 on the dress form

We did have to make quite a few adjustments to achieve the fit Alex was after. She wanted something that was relatively fitted in the bodice, so she wouldn’t look like she’d just wrapped a bolt of fabric around herself & called it a dress. Based on her measurements, I cut a straight medium, but we wound up taking the side seams in about 3″ on either side (grading from nothing at the armscye to the full 3″ just above the pockets). We made even more alterations to the back seam, which is thanfully a straight seam running from neck to hem. We took in the neckline 1.5″ & then curved the seam to take in a full 8″ at the waistline, grading back to nothing at the hem. I was worried that this was going to radically effect the grainline, & thus, the drape, but to my surprise, we had no problems. I did re-cut the collar the match the new neckline circumfrence. I originally seamed the back of the collar to take out the excess, but I hated how the seamline looked. Starting the collar from scratch also gave me a chance to miter the hem instead of just folding & stitching, which made for a more professional finish.

We didn’t adjust the length at all. The dress hits mid-thigh on the models on the pattern envelope. Alex is only 5 feet tall, & the dress hit her just above the knee, which was exactly what she wanted. 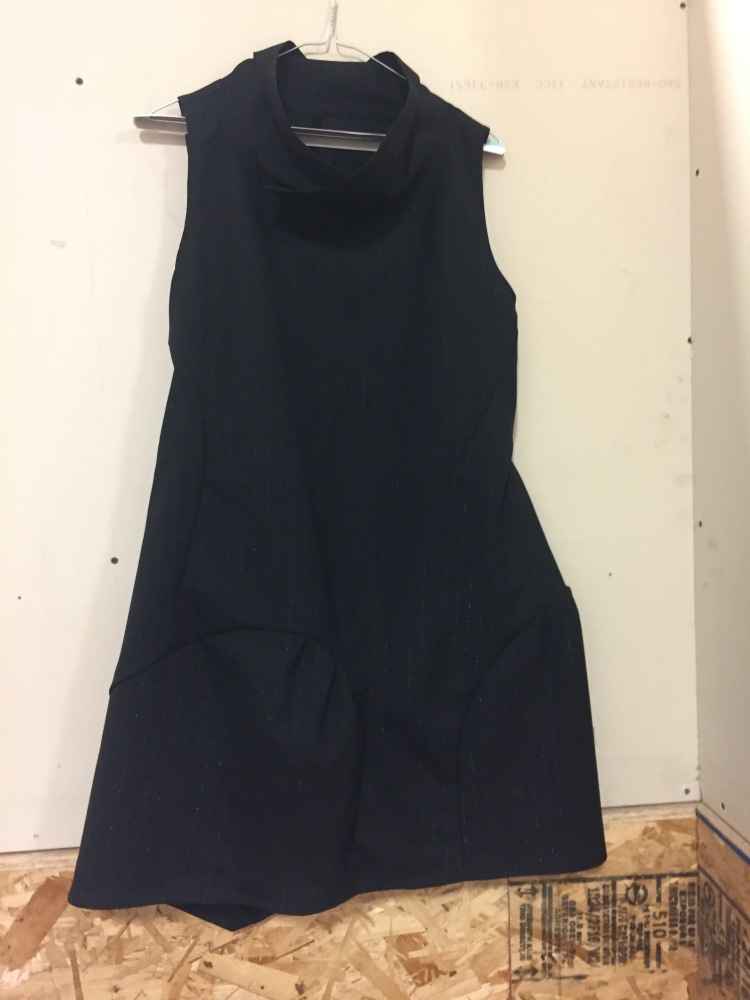 finished dress, hanging up in my studio

I am pretty thrilled with how well it all came together. I think the fit is spot-on, & I’m really proud of my sewing. The only thing I’d change is maybe hand-stitching the arm & neck facings & the hem. I followed the pattern directions & topstitched, but since none of the other seamlines are topstitched, I think the dress would look more elegant if it was hand-finished. I also think the topstitching at the neckline & arms is too far out from seams. I mean, I did it as the pattern instructed, but it’s like 3/8″ away from the seams & it just looks clumsy to me. I prefer to be about 1/8″ out. 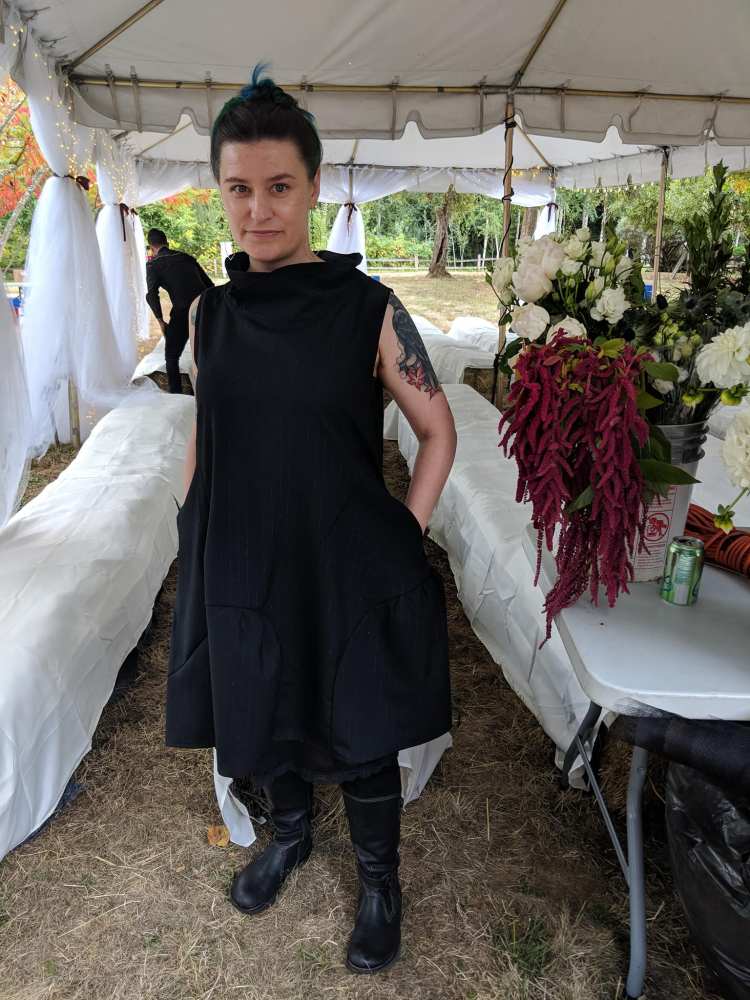 Alex at the wedding!

Hopefully I will get more sewing done in October. In fact, I have already finished a couple of projects! More to come!