I made three pairs of jeans in two weeks for my Pattern Throwdown post over on the Curvy Sewing Collective blog back in February, & the most successful of the bunch was the Cashmerette Ames jeans. When this pattern was first released, I fully intended to give it a miss, as I already had the Closet Case Ginger jeans pattern & the Itch to Stitch Liana jeans pattern (won during an Indie Pattern Month challenge over on the Monthly Stitch, but not sewn until the Pattern Throwdown). I am within the Cashmerette size range, but on the smaller end, & although I often have to make fitting alterations to straight-sized patterns, I fit into the upper reaches of most brands. So, for me, Cashmerette patterns are an option but not really a necessity. & to be honest, I wasn’t especially impressed by the sample jeans photographed for the release. I felt that both samples fit their models poorly, & whenever the sample garment shows fitting issues, I become skeptical of the pattern as a whole. If I’m shelling out premium indie pattern prices, I expect the designer to go above & beyond to make the sample garments reflective of the actual intended fit & style of the design. (Rightly or wrongly, I tend to give more of a pass to Big 4 patterns, both because I pretty much exclusively buy them on sale, & because I know those patterns are professional designed & graded by people with legit industry training–which doesn’t mean mistakes never happen, but I do find those patterns generally more trustworthy than the output of people who draft for themselves & then use basic vector programs for their grading…Anyway…) 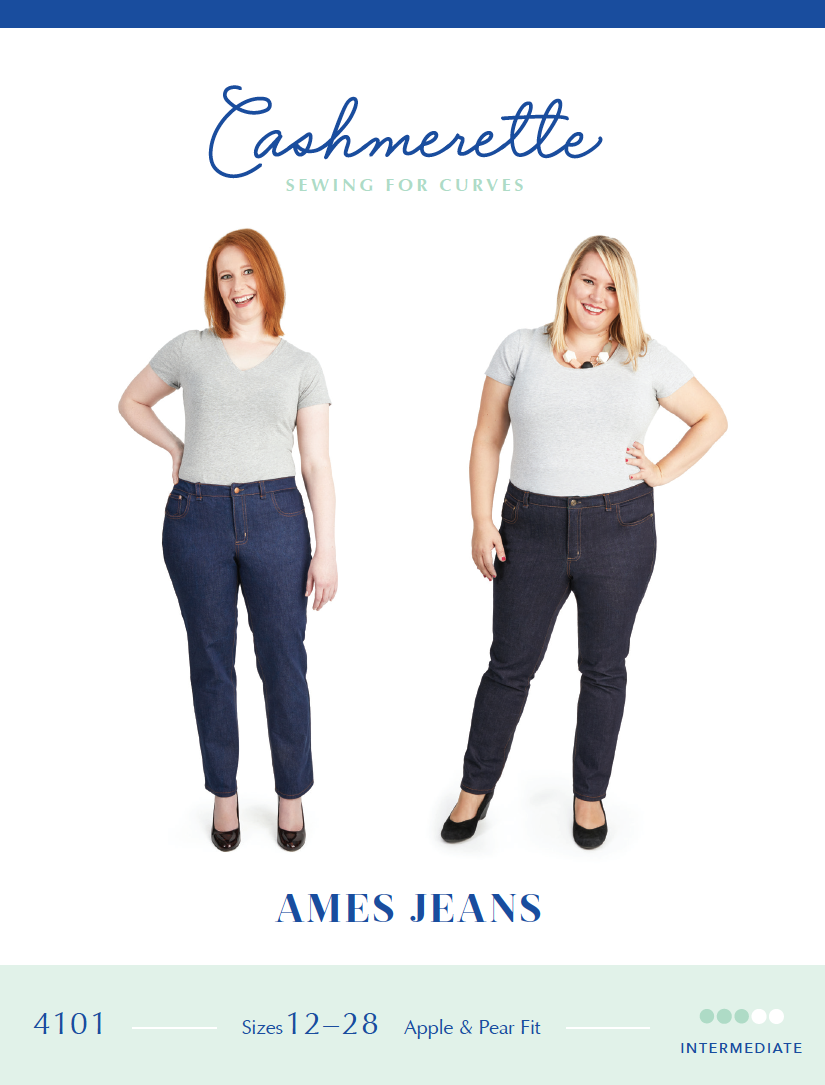 I bought this pattern with my own money, specifically for the Pattern Throwdown. If memory serves, I made a straight size 18. I chose the pear hip for reasons that are now inexplicable to me. I do not now & have never had a pear body type. I think the pattern guidelines on choosing your preferred pelvis shape said something about how the pear fit might be best for people who experience a lot of waistband gaping, & that is always a big problem for me with pants. But I am obviously an apple shape. I just tend to get waistband gaping because my waist is pretty narrow from the back. Most of my waist measurement is in the front.

I did end up shaving some excess fabric off the side seams at the hips after doing a basted fitting, & when I make this pattern again, I will use the apple pelvis, & possibly even grade down to a size 16 in the hips. I will also add maybe another inch to the inseam because the drafted 30″ looks just a little bit short on me. I feel like I am showing just a little bit too much sock at the ankle. Maybe I’ll try wearing them rolled up for a more intentionally cropped look & see how I feel about that.

A word about inseams: I read A LOT of sewing blogs & I often see people writing things like, “I’m only 5’2″ so I had to shorten the pants 3 inches,” or, “This designer drafts for someone who is 5’8″, so if you’re shorter/taller, bear that in mind.”

Obviously, inseam CAN be correlated to height, but it has a lot more to do with proportions. I’m 5’5″ & Jared is 5’10”. & yet, my inseam is actually 1″ longer than his. I have unusually long legs & he has an unusually long torso. This is why I generally ignore whatever height a pattern is supposedly drafted for & make decisions based on my measurements & on flat pattern measurements. That means an inseam of 31″ for full-length pants (my legs are literally about 2/3 of my body). For skirts & dresses, I like a finished length of 23″ or 24″, waist to hem, which hits just above the knee.

Anyway. Aside from those minor tweaks, this pattern fit me astonishingly well right out of the envelope. I specifically followed the pattern directions for all the construction in order to give a fair & accurate pattern review for the Throwdown, knowing that the post would be read by a lot of people who have never made jeans before & would be looking for a pattern with reliable, easy-to-follow instructions. & this pattern really nailed it. I think it has the clearest, more comprehensible instructions for doing a classic zipper fly that I have yet seen. All of the pattern pieces came together really nicely, including the pocket stays. (I’ve had issues with other patterns where the stays are too long & get in the way of the fly, or where they are oddly-shaped, or unnecessarily fussy in their construction.) The pattern accommodates certain curvy/plus fit challenges in its drafting, with a contoured waistband & a built-in full tummy adjustment. The pockets were well-proportioned & the fly was the perfect length for a classic mid-rise style–not too long, not too short.

I made the straight leg version, & I do think the legs turned out maybe just a hair on the skinny side. But I also sized down in the legs from a size 18 to a 16, so maybe that’s on me. I personally don’t mind the fit of the legs (aside from wishing I had just a little extra length), but a lot of people on my Pattern Throwdown post commented that the leg silhouette looked more skinny than straight.

I cross stitched the back pockets using a pattern I bought from Little Plastic Covers on Etsy. I adapted the font from that pattern into the extra letters I needed to spell “killjoy” & omitted the floral motifs because I just didn’t have time to complete them before the deadline for the Curvy Sewing Collective. I made a pair of corduroy Gingers using the same pattern last year, but they have a leg-twisting problem & are just too tight for my current size (I made them when I was in the middle of my cancer treatments & thus a little smaller because I wasn’t eating much). So I’m glad these turned out so well, allowing me to broadcast my feminist killjoy status far & wide!