I got my MRI results a lot sooner than I expected, so I won’t prolong the suspense: my brain is 100% normal. That’s obviously a good thing, but it means that we’re not any closer to finding an explanation for all of my strange health problems. About 5% of people with MS have clear brain scans, so it can’t be ruled out entirely, but you know. MS is pretty rare to begin with; 5% of an already very uncommon disease isn’t terribly likely.

I will be seeing my doctor soon to discuss. In the meantime, it has gotten hot as fuck in Kansas (almost 90 degrees today, ugh) & my body is in open rebellion. I’m having some kind of weird hip thing today. It doesn’t hurt to stand or sit perfectly still, but if I try to move in any way (even turning my head, or, say, typing up a blog post!), I am in excruciating agony. I tried to sew a little this morning because I have a new summer dress ready to roll & it would be perfect for this weather. But the pain is on the right side of my body & the act of using my right foot to press on my machine pedal was so agonizing, I openly wept. I snarfed a Percocet left over from my surgery. It didn’t make a dent.

Anyway! Who cares! Let’s talk about some sewing.

The little summer dress I’m currently working on is made from fabric I simply could not resist, from Spoonflower. I’m not ordinarily all up in the Spoonflower because their fabrics are really expensive, & not necessarily the best possible quality. I mean, you can buy some nice fucking fabric from Mood or wherever for $27 a yard. But I’m such a sucker for prints sometimes. I just fall in love & reason goes out the window.

As long as I was already selling my first-born to pay for some damn jersey, I spent some time on the site to see if there was anything else calling my name, & I discovered a whole selection of really cute calendar prints! Like for tea towels, you know? My mom had some when I was a kid, with, like, an image of a rooster & a whole calendar for 1986 printed beneath it. I’ve always found calendar tea towels really charming, & I was like, “Wait, I could MAKE one!” As so often happens, my mind’s eye took on a certain Vaseline-on-the-camera quality, as I imagined Ramona in fifty years, opening her cedar chest to show someone her treasured collection of pristine calendar tea towels hand-sewn by her mother over the years. 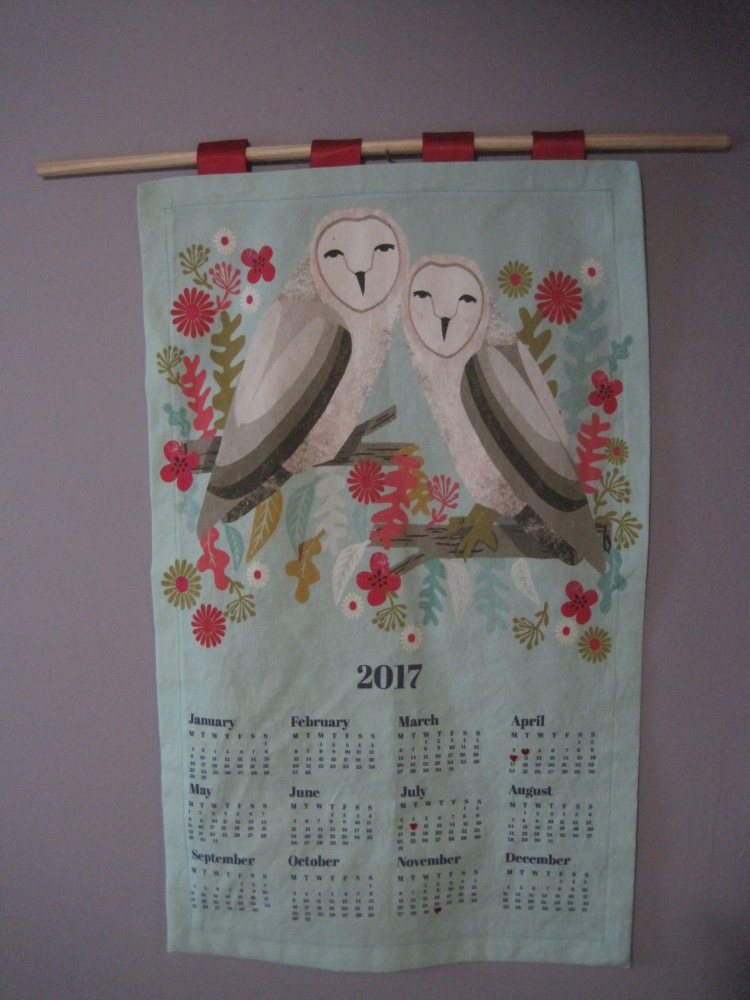 I was quite spoiled for choice in the 2017 department, because, you know, it’s May. I’m sure the designer of the print I chose was surprised to be getting paid for a calendar print so late in the year. It was really hard to pick, but I went with the owls because they just reminded me of Jared & myself somehow. We have a real Statler & Waldorf dynamic, & even though Statler & Waldorf are human Muppets, they’ve always made me think of owls. I guess because I think owls are really judge-y? Just like me & Jared! 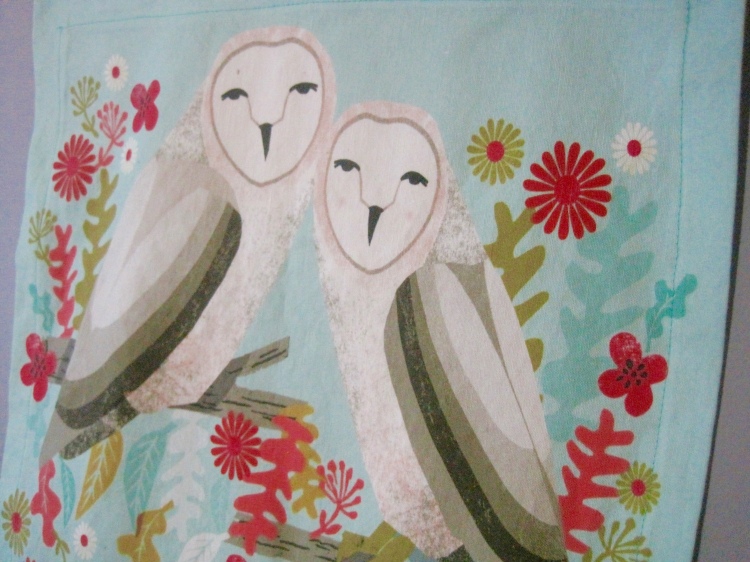 You can buy the calendar prints as fat quarters, so I bought one on Spoonflower’s linen blend. The fabric was cardboard-stiff when it arrived, but it relaxed a bit after being washed. To be honest, I’m really not sure how well it would function as an actual tea towel, due to the printing process. It seems like the print really compromises the fabric’s natural absorption properties. Luckily, our house is already overflowing with tea towels & various rags (pro-tip: cut up old sheets & clothing to make un-paper towels; they work perfectly well, they’re re-useable, they don’t cost anything because they’re things that would have otherwise been thrown out, & they are zero effort). So I felt perfectly justified in making a decorative tea towel. 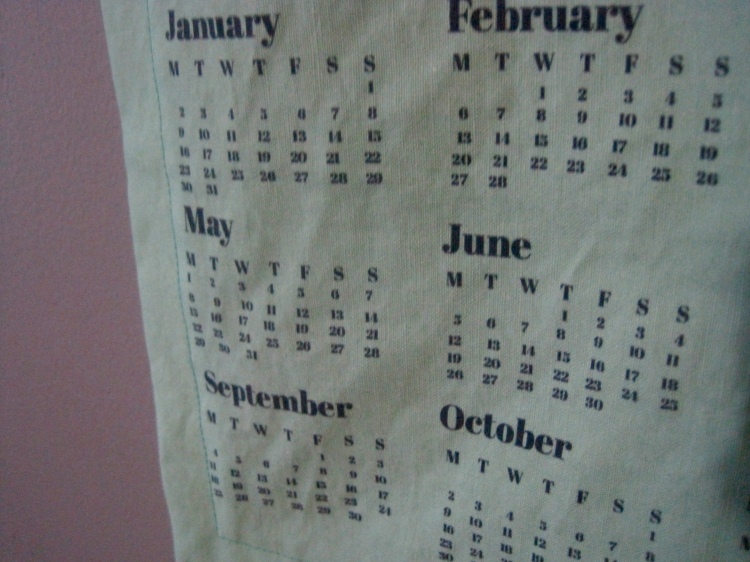 I do think the fabric may have stretched off-grain a bit in the printing process, because there were spots where the printing was not quite straight. Linen goes off-grain easily because it’s such a loose weave. So that was kind of a bummer, but somehow I’ve found the inner strength to persevere. 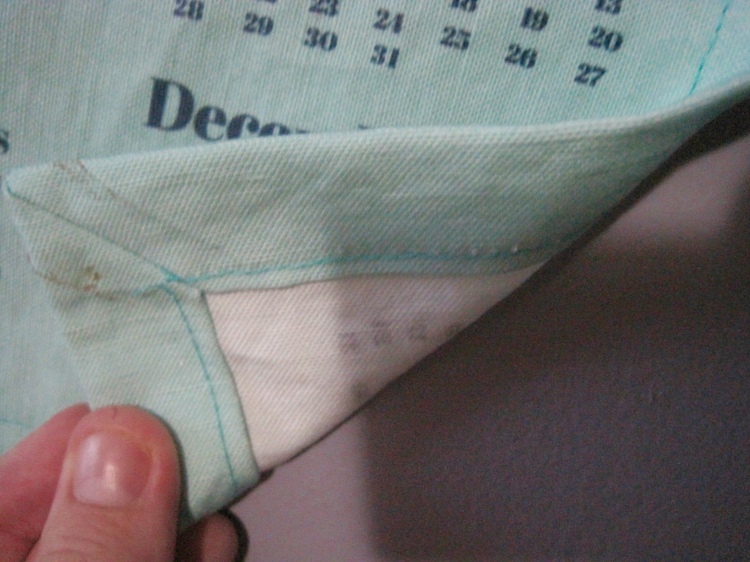 Yeah, I burnt the corner a little. Whoops.

Nothing really to write home about as far as the sewing process goes. I mitered the corners (another pro-tip: when you trim away the excess fabric after sewing the corner seam, one side of the seam will be trimmed away at an angle; trim away the other side to match & press the seam open for a really sharp, pointy corner) & topstitched with a thread just slightly darker than the background color. I glued on some teeny tiny Swarovski crystals to mark days of importance to our family (our birthdays & Jared’s & my anniversary). I made the hanging loops from a bit of ribbon I had lying around & attached it with double-sided fusible tape so there wouldn’t be any extra visible stitching on the tea towel. Next time, I will stitch the ribbon on before mitering & topstitching, because I do find stitching more trustworthy than using a fusible. Not that a tea towel falling off the wall would be a calamity or anything. 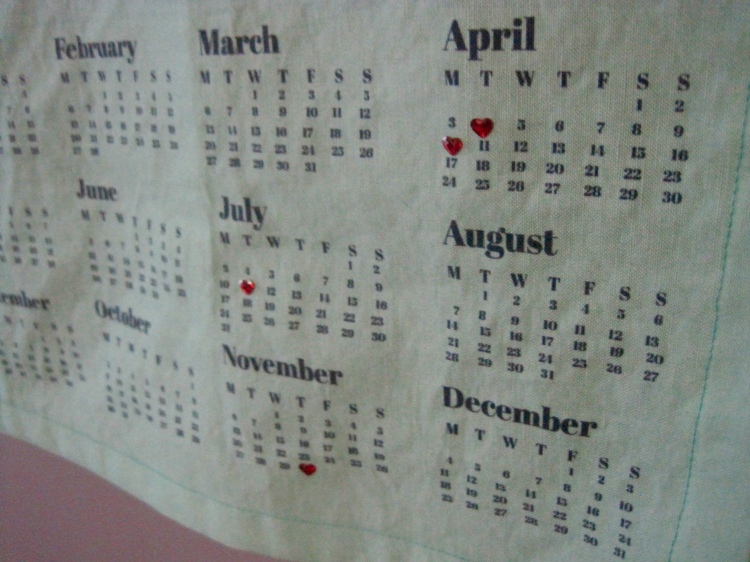 I cut the dowel down to size myself using Jared’s hand saw, & realized in the process…Hey! I’ve never used a hand saw before. My review: not as easy as it looks. The cut edge could really stand to be sanded a bit, but the sandpaper is buried somewhere in the depths of our storage closet, so…nope. It’ll turn up when we move & I’ll sand the dowel then. 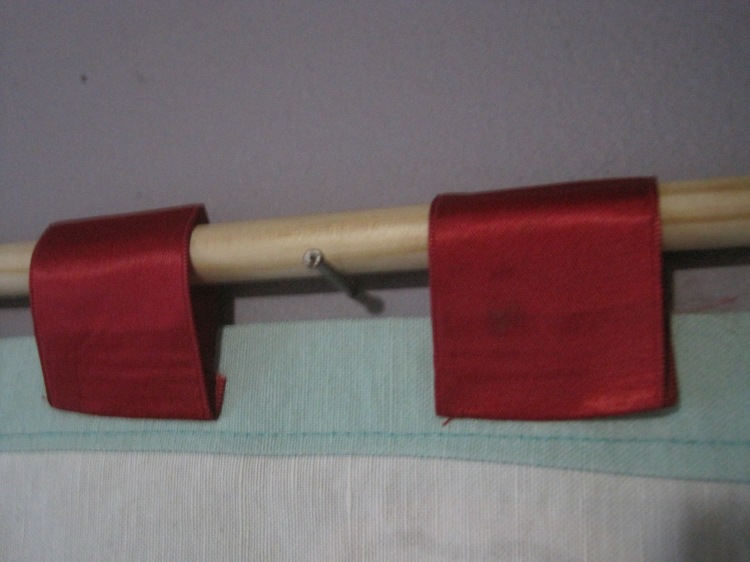 So yeah! Just a quick & easy instant gratification project to give myself a break between beading & cross stitching sessions. The finished tea towel is pretty large, like 14″ by 22″ or so? So it adds a lot of pizazz to the house without a lot of effort. I’m already getting antsy for people to design prints for 2018! (Or maybe I’ll design one myself?) Something like this would also make a nice handmade gift, in case anyone wants to get a jump on the December gift-giving holidays.

Really, my only regret is that the owl print gave the Jared the opportunity to say, “More like a tea OWL, am I right?” *sigh* Do you see what I have to live with, people? & he is passing his punnery on to Ramona.