This is my first completed project of 2017!

It’s some pants. To be more specific, it is the Closet Case Patterns Ginger jeans, made from black corduroy. This is my fourth pair of Gingers, so not much to write home about here…Or so you might think! 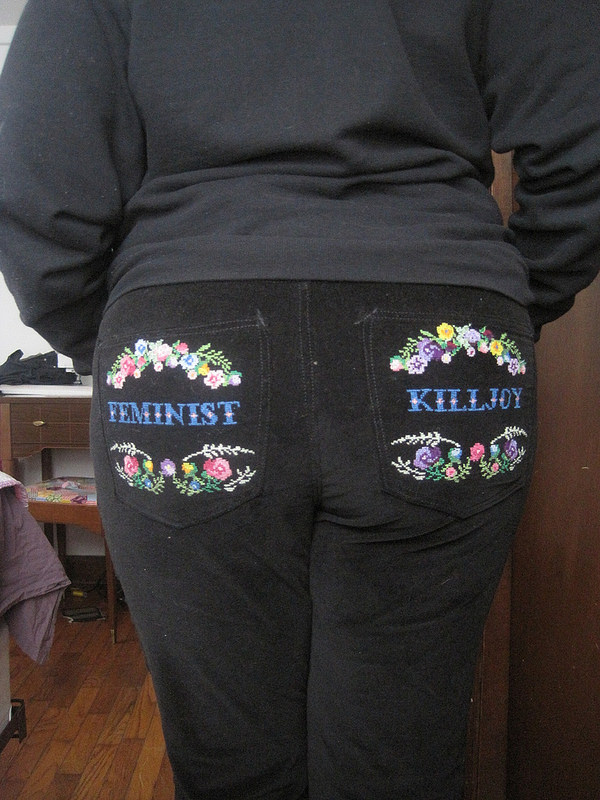 Kapow! These pockets are pretty much everything.

When I got into cross stitching a couple of months ago, I was like, “Okay, this is awesome, but how can I incorporate it into garment-making?” It occurred to me that the feminist cross stitch I was working on (my very first cross stitch project) would fit really well on the back pocket of some jeans. I knew that it was possible to cross stitch on to clothing because my sister cross stitched a portrait of my dearly departed cat, Charlotte, on to a onesie while I was pregnant with Ramona.

Maybe people already know this, but here’s an overview of how it works: there’s this special cross stitching cloth you can buy for cross stitching on to other fabrics. It’s called waste canvas. It is woven differently from your usual Aida cloth in that the weave is looser, but the fibers are also a lot more stiff. You baste it on to your fabric & cross stitch away. When you’re done, you laboriously pull out each individual fiber of the waste cloth, leaving behind your lovely cross stitches on your onesie or pillowcase or jeans pocket or whatever.

Sounds simple enough, right? Um…it’s not, really. I don’t know if I necessarily did it “right,” because I’d never done it before, but I chose to stitch into the teeny tiny corners on the edges of the waste canvas squares. They are smaller & hence more difficult to access than the holes in Aida cloth of the same count. & because I was also stitching through cloth that was not pre-perforated, that was another added layer of difficulty.

Not saying that it was necessarily difficult. I’d classify it as fiddly, perhaps. I didn’t enjoy the process as much as I enjoy working with Aida cloth. In fact, it took me almost three solid weeks just to do the “feminist” pocket because it was so fiddly & unpleasant. I was consumed by anxiety the entire time because the corduroy had some stretch to it (a necessity for the Ginger jeans pattern), & I’d chosen not to interface it before stitching because I wanted to preserve the stretch for when the jeans were actually constructed. I didn’t want a too-tight non-stretchy pocket giving me some kind of weird quad-butt effect. But the corduroy stretched & wrinkled as I stitched & I was so worried I was stitching permanent distortions into the fabric.

Miraculously, after I pulled out all the waste canvas fibers, my stitching looked great & the corduroy was perfectly unwrinkled! I don’t know if that was just dumb luck or if that’s part of the weird black magic of waste canvas, but either way…hooray!

Before I got to that point though, I had to pull out all those damn fibers.

UGH. I hated this process! Even though I used tweezers, it took hours, & by the end, I had enormous blisters on my thumb & index finger, & had lost all feeling in my hand. The tip of my index finger is still flat from squeezing the tweezers, & I finished the pockets four days ago. The trick is to just be patient & methodical. Line up some podcasts, get comfortable, & just go one fiber at a time.

My goal was to finish these pants by the end of January, for the “not stashed” Monthly Stitch challenge. The waste canvas was the most recent sewing thing I’d bought. I ordered it from the Nordic Needle in November, but it sold out & wasn’t restocked & delivered until late December, by which point I had lost steam for tackling a waste canvas project. I know I would have just stashed it until the end of time if not for this challenge forcing me outside my comfort zone.

I cut out the corduroy during breaks from the cross stitching, so everything was ready to roll as soon as the back pockets were finished. I completed them on Friday, January 20, & I realized that if I hauled ass, I could get the jeans finished in time to wear to them to the Women’s March in Topeka the next day. & I did it! I tragically do not have a photo of me modeling them that day because I felt weird asking Jared to take a photo of my ass at a feminist event. But I do have a photo of Ramona at the march:

Because I sewed them so quickly…they are not my all-time best sewing. I didn’t ease the legs enough through the hips, resulting in a tiny bit of twisting on the left leg. I accidentally snipped a hole right under the zipper fly, which I fixed with a little patch of interfacing on the back & some satin stitching on the front. It’s not really visible when I’m wearing them, but, uh… 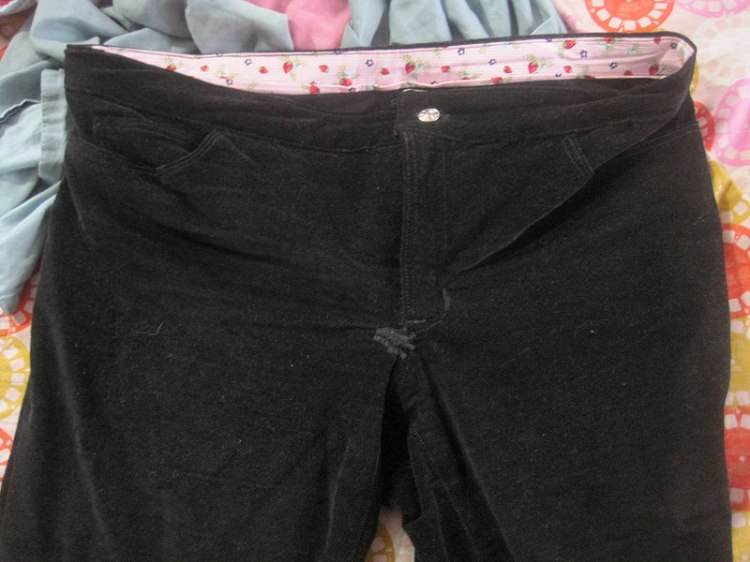 You can definitely see it here! You might also be able to tell that the waistband is not exactly the same width at the button/buttonhole. I don’t even know how that happened, since it wasn’t even close to being an issue with my previous three Gingers.

I also didn’t trim the seam allowances in the waistband, since it always causes issues with seam enclosure. It looks fine, but it feels lumpy. Not on my waist, just when I’m folding the jeans or something. It might just be an example of me being too critical of my own sewing. 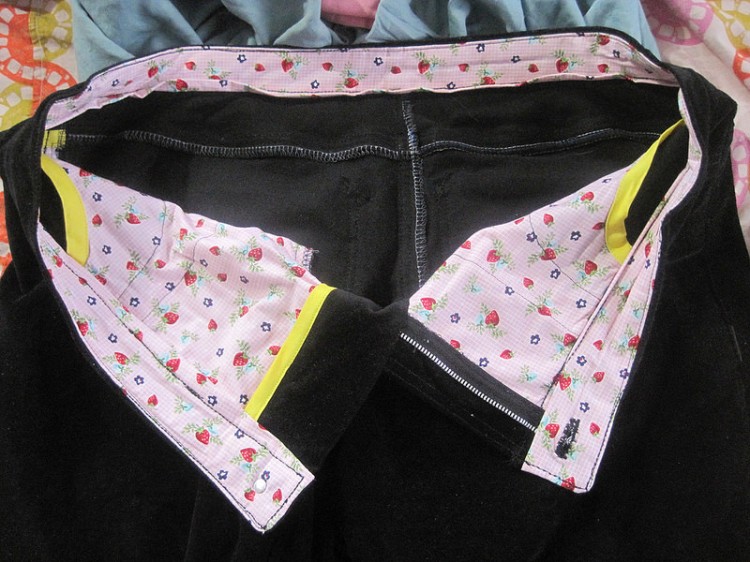 I did remember to sew the pockets the right way round this time, so the print is visible on the inside. The edges are finished with bias tape because I tried to follow the pattern directions for installing the pockets &…well, I guess I’d never tried to use the directions before, because they made ZERO sense to me. I ripped them out & re-sewed them like four times before I just gave up & did them my own way, by which point the edges of the strawberry print cotton were looking pretty raggedy. I finished the fly shield with bias tape too to try to make it all look kind of intentional. If I hadn’t been rushing, I would have taken the time to make my own bias tape, but I was hustling so I just went with some store-bought yellow stuff from my stash.

If we’re being real, my indigo Gingers with the pink topstitching are still my faves as far as comfort & sewing quality. I do regret rushing this project, because I could have done a better job if I’d taken my time more. But those back pockets pockets are PERFECTION, & you know…These pants are good enough. In both politics & sewing, this is really no time to let perfection be the enemy of good enough. 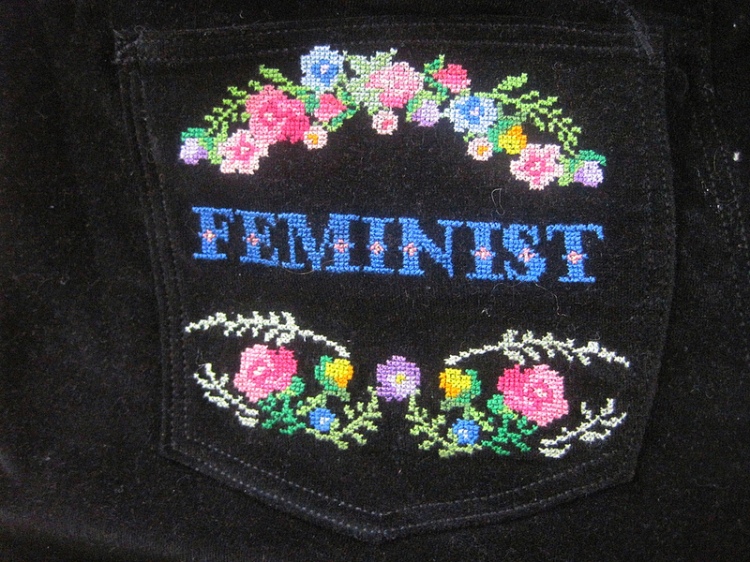