Let’s take a deep dive into history & talk about a shirt I made sometime in June. 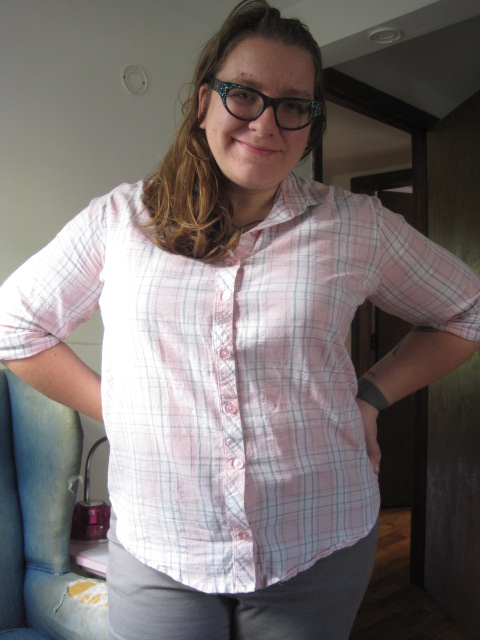 This is the Archer shirt from Grainline Studio, which is currently up for consideration as a plus-size pattern of the year over at the Curvy Sewing Collective. Um…what? Sorry, guys, this is really not a pattern for plus-sized sewers. The size range is fairly limited. I added multiple inches to accommodate my size, & my measurements when this photo was taken were 44″/39″/46″, which I consider kind of small-to-medium plus. This is pretty much the most flattering of the dozens of photos I took. I know we could have a whole complex discussion about larger bodies & the concept of “flattering”. My goal is not to somehow use my clothing to trick anyone into thinking I am skinny or in possession of a flat belly. But all other things being equal, I’m still not super-stoked about leaving the house looking like this: 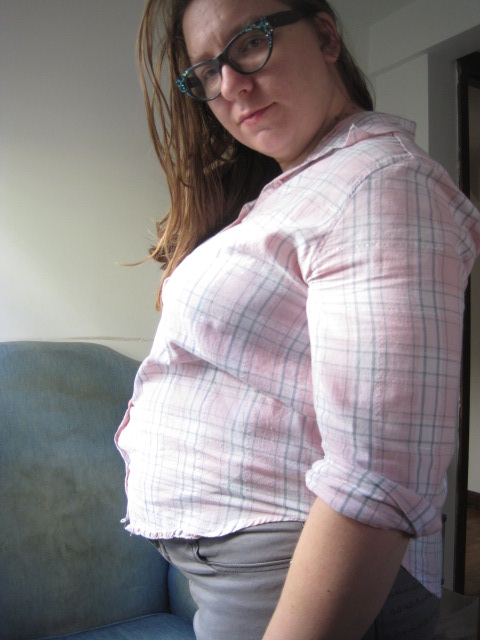 Just for shits & giggles, let’s compare the above photo to this one: 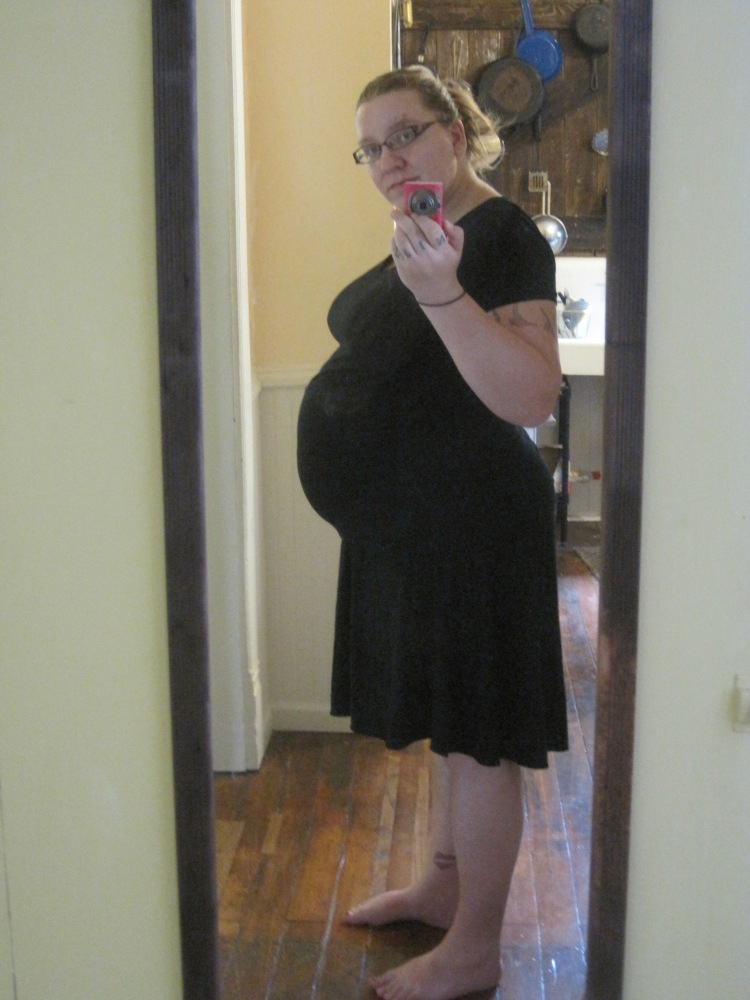 From when I was 24 weeks pregnant with Ramona. Granted, she was a pretty big fetus.

This pink madras Archer was a “wearable muslin” I made in preparation for the white pintucked number I blogged about over the summer, so obviously, I did tweak the pattern some more after this & make it again. I even have a third version cut out & ready to sew. So it’s not like I think this pattern should be doused in kerosene & set alight. I just think there are other patterns that would probably suit me better. I am tempted by Chasmerette’s Harrison pattern. I think princess seams work a lot better for me than boxy shapes like the Archer.

Some plus-sized sewers who have made the Archer have added darts to accommodate curves & give a little more shape. I did not, because I was actually going for a boxy, slouchy look. It turns out that it’s not a look I actually like to wear, but it’s not the pattern’s fault that I sewed a silhouette I don’t like. I knew what I was getting into. The pattern itself is fine. I was annoyed by the fact that it has separate pattern pieces for the left & right fronts, because one side has a button band that is cut-on & folded under, & the other has a button band that is sewn on. Why? I’m sincerely asking if there is a legitimate reason for this, if it sets the stage for some sort of improved final product. I much prefer the construction of, say, the M6696 shirtdress, which has mirrored front halves & sewn-on button bands. I also found the shirt cuffs strangely fiddly to sew, but that ultimately didn’t end up being a big problem with this shirt, because: 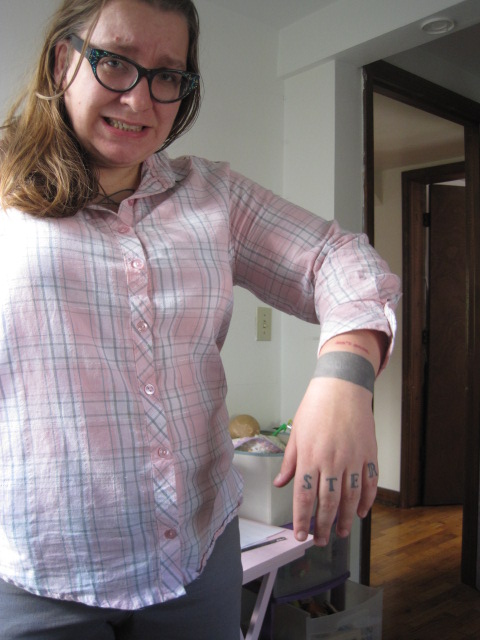 Yeah. That is one excessively short sleeve. Totally 100% my own fault. I had read that the sleeves on this guy ran long, especially with the larger sizes. (That classic assumption that plus-sized sewers must have arms that are also proportionally longer.) I measured my arm & cut my sleeves accordingly, but I made two utterly idiotic mistakes: 1) I measured from my armpit instead of my shoulder point. I mean, how dumb can you get. & 2) I didn’t even stop to consider the necessity of ease for movement. When my arm is down, the cuff just brushes my wristbone (so, too short), but when I bend my elbow to actually, you know, use my arm, the cuff rides halfway up my forearm.

Honestly, this whole post is just a celebration of my sewing incompetence. You’re laughing with me, right? Not at me?

In case you wondered, that red tattoo on my arm says, “Don’t mourn. Organize.” More relevant than ever to our political climate, wouldn’t you say? I got that tattoo back in 2001. Little did I realize then how much worse things could get.

I made some other dumb mistakes with this shirt. I completely forgot to interface the collar. Not sure how that happened, since interfacing is generally the first thing I do after my fabric is cut, but it happened, so my collar is very limp & sad. It also may have been smart to use some some kind of interfacing, like a strip of Heat N’ Bond or something, on the hem, because the madras is VERY lightweight & the hem wants to roll up. I hemmed my white Archer with narrow bias tape, so everything stays very smooth & tidy. My sleeve plackets could be better. I really should have spaced my buttons better because my shirt needs a little help in the belly area (though I did manage to eliminate my usual bugbear, bust gaping). 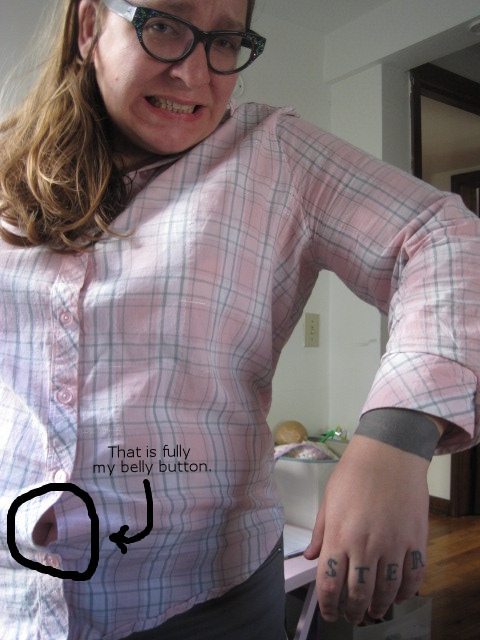 I also intentionally skipped the breast pockets because I hate breast pockets. I have enough going on up there, I don’t need useless pockets drawing attention.

On the plus side, though, I did a pretty nice job with my plaid matching.

The nitty gritty: I made view A. No butt ruffle for me, thanks. I cut a size 16 & did a full bust adjustment of some inches (two? I honestly don’t remember) using the slide & pivot method. I kept the added width through the waist & tapered back down to a 16 at the hips. I added an extra inch of length (which was obviously not quite enough). I think I shortened the sleeves 3″, which was way too much. I got the fabric at Hancock before they closed. The photos don’t show it, but it has silver Lurex threads woven through it, so it glitters a bit, but doesn’t contain enough Lurex to be itchy. The fabric is really lightweight & fairly loosely-woven, so fraying complicated the process a bit. I used translucent pink plastic buttons.

I’ve worn this shirt a bit, especially since I got my cancer diagnosis & lost a bit of weight. But obviously the fit is not the greatest, the collar is terrible, & I can only wear it with the sleeves rolled up, which presents a challenge. The weather needs to be cool enough that I can tolerate a woven shirt, but warm enough that I don’t need a second layer. The shirt also kind of requires a tight-fitting bottom. I tried wearing it with my gray twill wrap skirt a few times, but the boxiness on top combined with the volume on the bottom just wasn’t working for me.

Moral of the story: I’m glad this pattern was purchased for me as part of the Indie Pattern Month pattern swap. & I’m also glad I tried it. Even though it didn’t turn out great, it shed some light on what I like in a button-down shirt, & practice with pattern-matching is always appreciated. Sewing the curved hem was really fun, & I think the shape of it is lovely, even though the shirt overall is too short. I don’t plan to use this pattern to make a standard button-down again, but I am willing to experiment with making it even bigger & slouchier for kind of a boyfriend/90s-style flannel silhouette, to wear over other shirts.

& this goes to show that even projects that didn’t turn out very well can be enlightening…& funny.