My plan for this post had been to whip up a second muslin, share some photos of what I’d produced & the changes/alterations/re-drafts I’ve had to make away, & basically just keep hammering away at how much this pattern sucks.

But then Colette let it be known through the grapevine (ie, telling Deepika over on Pattern Review) that they would be making an “announcement” about the Rue on “Tuesday”. I refreshed the Colette blog throughout the morning waiting for the news to drop, but it just kept showing me the news about the latest issue of “Seamwork”. (To which I say, no thanks. It’s bonkers that I don’t read “Seamwork,” given that I read constantly, sometimes three books a day, & will read anything I can find about sewing. But “Seamwork” just doesn’t hold my attention, & it’s a big ol’ nope on the patterns.)

I decided to cruise over to the Rue sewalong page to see if there were any back-asswards new constructions tips over there for me to laugh at. There were not, because the sewalong has been suspended! This is where Colette dropped their big news: due to “customer feedback” (ie, blistering disgust across the internet), they are redesigning the Rue to drop the cross-bust style line below the bust (like in Sarai’s infamous plaid Rue), & they are also apparently doing something about the armscye & sleeve issues. People who have already purchased the Rue will be re-issued new pattern pieces for free in the manner in which they bought the original Rue. I bought a paper pattern, so I will be receiving paper pieces in the mail. They’re saying PDF customers can expect to receive their new pieces in about three weeks, & paper customers are looking at six. The sewalong will pick up again at the end of the month, starting fresh with bodice alterations relevant to the new draft.

So! On the one hand: good! They’re “fixing” the problem. People who have already purchased the pattern will be receiving corrections automatically, & people who bought paper to spare themselves the trouble of the PDF format will be getting paper corrections, which is a nice (& undoubtedly expensive) touch. I’m especially glad to hear that they’re addressing the armscye. In my journey with the Rue pattern thus far, I’ve pretty much come to the conclusion that 85% of the problem is a shitty armscye/sleeve draft. Yeah, the curved style line hits in a weird place, but that’s fairly easy to address, even for a relative newbie. But even experienced sewers shy away from making major changes to sleeves & armscyes.

But there are still some problems. 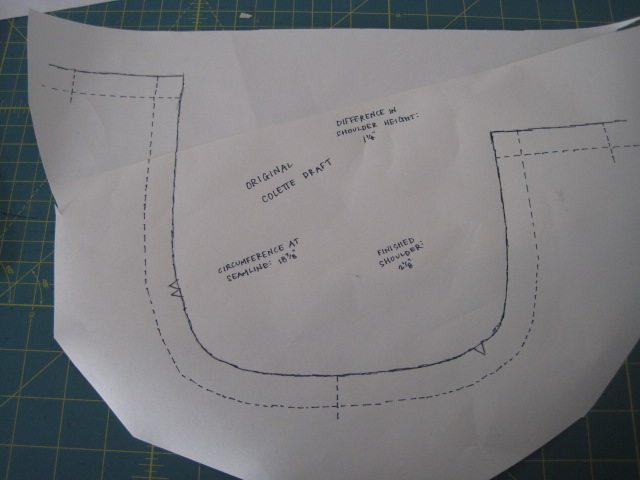 This shows how oddly square & shallow it is (as well as how narrow the shoulder is). This is the size 12 armscye, which ostensibly accommodates a 37″ high bust (like mine). & yet, the front armscye is only 5.5″ deep from seamline to seamline. That is more than inch smaller than the depth you’d expect to see on a size 0 pattern. The shape also does not seem to be designed for the ball-shaped socket that is the shoulder joint, & you can see that whatever shoulder slope may exist would be the product of the fabric being forced to twist to the side to meet front & back at such a squared-off angle.

Above is one of the sample dresses from the official Rue release. It was smart of them to use that fabric. People responded really well to it, & it plays up the opportunities for showcasing design elements by cutting different pieces on the cross-grain or bias.

It also serves as a good illustration of the shoulder/armscye issue. Look at the way the stripe runs vertically down the middle of the bodice, but fans out toward the shoulder on a more diagonal line starting at the center of the bust. There was a lot of curiosity & speculation about how that effect was achieved. Multiple pattern pieces for the upper bust? Some sort of interesting dart that manipulates the grainline?

Nope. Just a shitty draft. The armscye is so shallow & squared-off that the fabric is just pulled off-grain at shoulder point, radiating the distortion back toward the bust where the tucks create play in the fabric (as well as excess fabric across the chest, just looking for someplace to go). This causes all kinds of gaping & bubbling at the back & underarm. & the issue is exacerbated when you fit the poorly-drafted sleeves into the armscye. 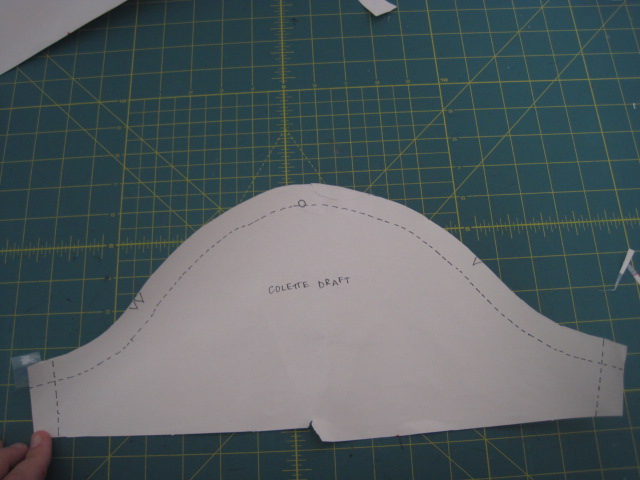 Here’s the Colette sleeve cap. Rather flat, isn’t it? A flatter, wider sleeve cap can work quite nicely for a garment with a more relaxed fit through the shoulder. But the sample photos & line drawings make clear that this is a garment with a fairly fitted sleeve. A fitted sleeve with a sleeve cap this flat will just pull, causing draglines across the sleeve & around the armscye. Which is exactly what you see in pretty much every Rue floating around online so far.

I’m glad they have FINALLY copped to this being an issue, & that they are planning some kind of fix, but the dates they are giving people mean there’s not really going to be any time for thorough tests of the new draft. & there’s also the question of whether we can truly anticipate a well-drafted solution from the same company that let this mess out of the workroom in the first place. Once you understand how the garment is constructed, the fit issues are obvious in the sample photos, & yet, somehow, everyone involved with this release was like, “Lookin’ good! Let’s roll!” All I can figure is that they either decided it was good enough & that they had enough fangirls that any criticism could easily be dismissed, or they really didn’t see the problems until scores of irate sewers pointed them out. Neither option is good.

Now I have to decide if I should keep plugging away with my own fixes or if I should cool my heels until mid-November when the new draft is due to arrive. I did go out & buy fabric for my billionth M6696 yesterday. Maybe I’ll whip that up & give myself a mental health break from the Drafting Murders of the Rue Dress.

& PS–Thanks for all the thoughtful comments on my last post!

23 thoughts on “We need to talk about the Rue dress some more.”