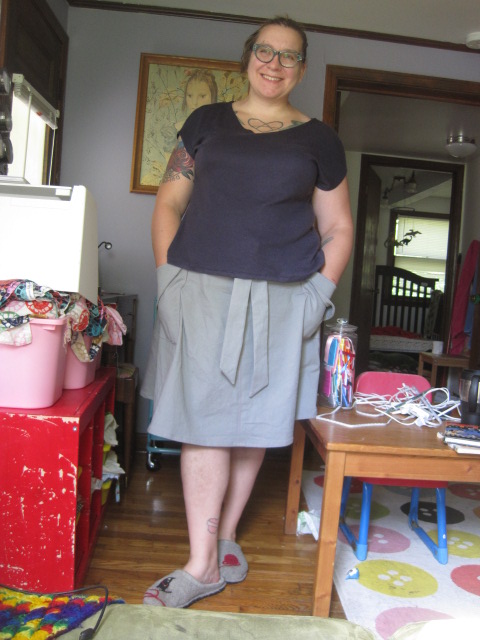 Let me just explain this photo situation first. I am still figuring out how to best photograph stuff I make for the blog in the new house. To zoom out enough to get the entire outfit in the shot, there was also an undue amount of width, so you can see my messy sewing table area & Ramona’s bedroom in the background. This was a good spot in terms of light, but it probably needs better staging. OR NOT, because who cares. I’m not exactly a blogging professional here. 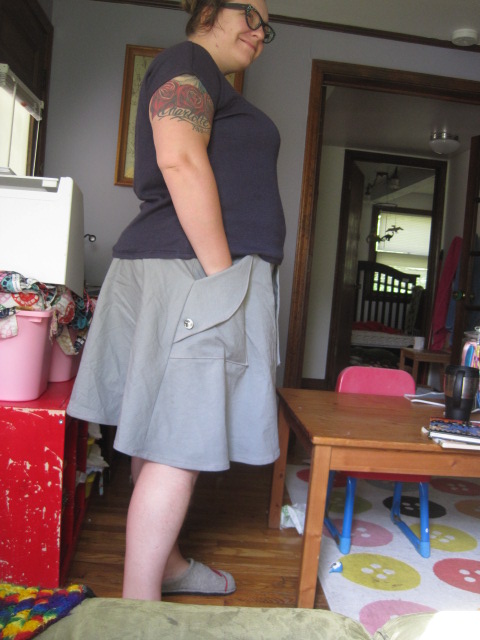 As you can see from this wonkus angle.

This is vintage Simplicity 7915, a wrap skirt made in gray twill. 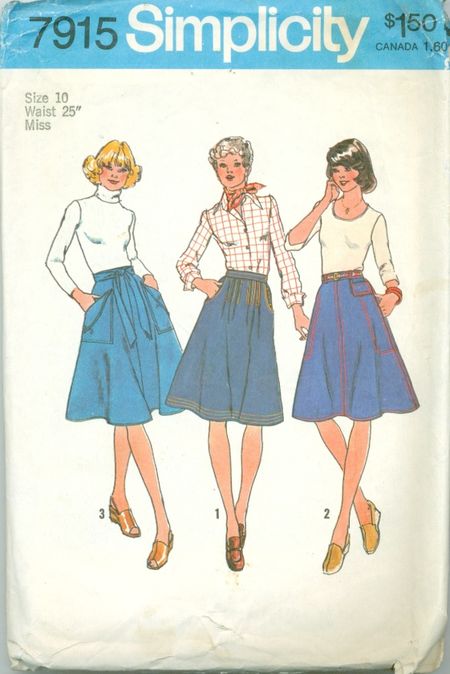 I made view 3, as seen on the blonde lady sporting a turtleneck. This was my first ever vintage pattern. I’ve never bothered with them before because basically no vintage patterns exist in my size & I don’t want to bother grading up when it’s easy enough for me to find modern patterns in my size, or in need of only a few fitting tweaks.

Jared’s mom sent me this pattern. She paid me to make her two versions of view 3, one in black cotton lawn, & one in plaid cotton. The pattern she sent was for her size, a 26″ waist. & the fabrics she chose were not really the most appropriate for the garment. The lawn was downright sheer. I cut the whole thing on a single layer to conserve fabric, in the hopes of having enough extra to squeak out an underlining for the front. (The back doesn’t really need one because it wraps in the back, making two layers there regardless.) Cutting the fabric was far & away the worst part of making these skirts. It’s a pretty full skirt & none of the pieces are symmetrical, so nothing is cut on the fold. I have a fairly large cutting table, but my pattern pieces were too wide to fit, even in the tiny (to me) 26″ waist size. I got there in the end, & managed to even include an underlining, but it was not fun. 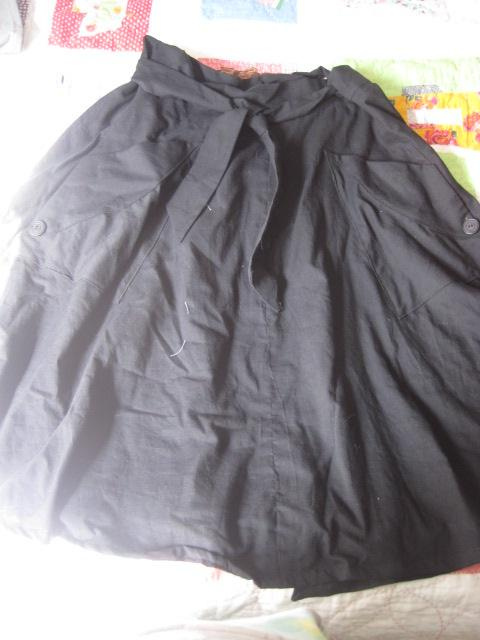 Here is a blown-out photo of the black one. It turned out all right. I misunderstood the instructions for topstitching the pocket flap & stitched it to the pocket (before sewing it on to the skirt, so it still functions as a pocket). The hem is kind of a mess because I was trying to fold up two layers of fabric at once. If I had it to do over again, I would have hemmed the underlining layer separately. & the less said about the keyhole in the waistband for the tie, the better. I definitely whiffed that bit on my first try.

Once the black one was done, I moved on to the trickier plaid version. 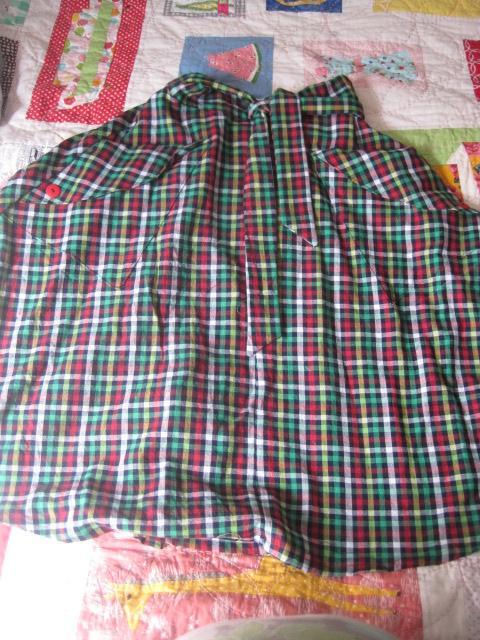 Tricky because I wanted to match the plaid. This skirt has big ol’ patch pockets. Do you see them? Maybe not because I matched the plaid so well! The only give away is that the flap is on the bias. 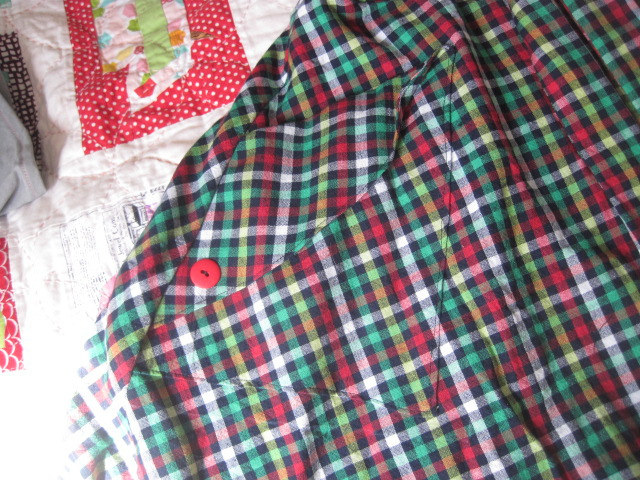 Look at that! Near flawless. & it only took me approximately 70 billion hours to cut.

The pocket construction for this version of the skirt is really interesting. The flap is formed from the facing. The main pocket is shaped like an open alligator mouth attached to a big rectangle, & the facing is just the alligator mouth. The curved edges of the mouth are sewn together, right sides facing. Then all the edges are trimmed, the curve is clipped, & the facing is turned in, as are the raw edges of the pocket. Everything is pressed nice & flat & the curved edge is topstitched. The top part of the alligator mouth is then folded down to the exterior of the pocket at an angle, forming the bias flap. The pocket is topstitched to the skirt & the flap is secured with a button.

It took me a long time to figure out exactly how to construct the pocket, but once I got there, it was very easy & pleasant to sew. & this skirt is near-perfect. My only issue with it is a little wobble in the front middle seam, but hopefully it will be covered by the tie ends & no one will ever notice.

Once Sarah’s skirts were finished, I decided to grade the skirt up to my size. I’ve sized up patterns in the past, but it’s generally been an issue of maybe adding one more inch to a skirt waist or something. Not really a huge undertaking. But this time, I was grading a pattern made for a 26″ waist up to my 38″ waist. Adding a little extra for wearing ease & knowing that a wrap skirt is essentially tied to fit, I went ahead & made the front 20″ (including seam allowances). The original skirt was 14″ wide at the waist, & cut in two panels, so I had to add 3″ to the panel (2 panels times 3 inches each equals 6, plus the original width of 14″ equals 20″). I distributed the extra width by slashing & spreading the skirt 1″ in three places. At the end of the day, I probably made it just a little bit too wide (I’ve lost some weight recently), but it’s fine, because it ties to fit.

The back was a little trickier because I had to guess at ratios. For a 26″ waist, let’s say the 26″ are equally distributed front & back, making the back waist 13″ wide. Because the back is the wrap panels, & neither covers the back entirely, each one was a little smaller than 13″. Let’s say they were each 10″, roughly 75% of the back waist width. Rather than making my back panels 3″ smaller than my back waist width (16″ on 19″), I used the 75% ratio, which came out to 15″, including wearing ease. I slashed & spread 1″ in five places. This also made the waistline significantly more curved, which is good for my swayback & relatively larger badonk-a-donk. I used the same ratio math to lengthen the ties, because it really sucks, as a larger person, to have stubby little ties sticking out because they aren’t long enough to wrap around the body & fall nicely like they do on slimmer people. 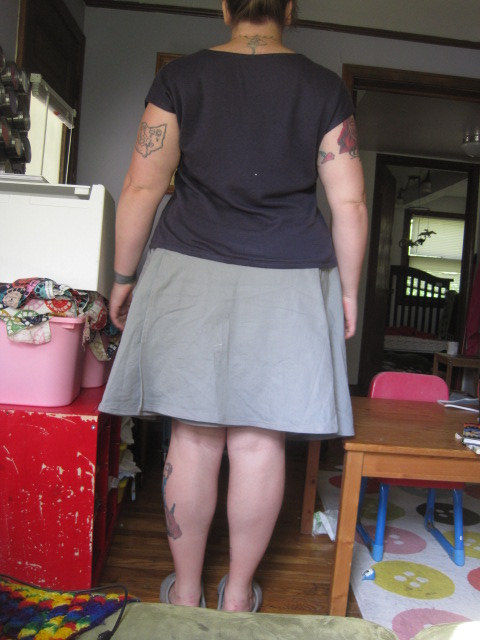 You can see one side of the back wrap ends over on the left here, & the skirt is a nice full shape with a lot of body, thanks to making it out of twill. I also shortened it about 3″, because I like my skirts to end at or just above the knee. The tie end for the other side of the back wrap feeds through a keyhole in the waistband so it can wrap around & tie in the front. 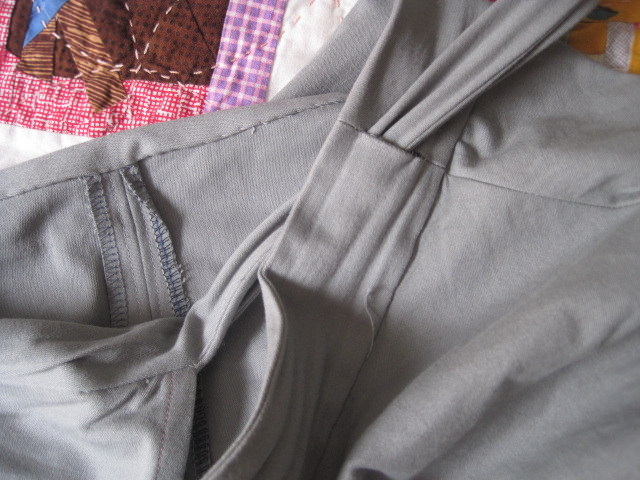 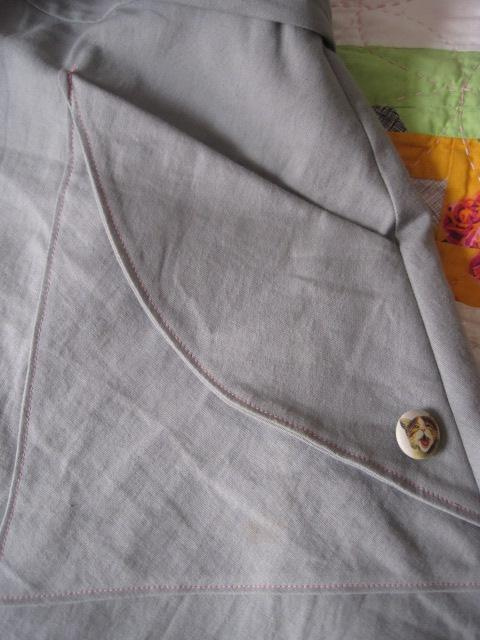 I used pink thread for my topstitching (pink, gray, & black are my neutrals) & secured the pocket flaps with these little cat face shank buttons I ordered from M&J Trimming a few months ago. 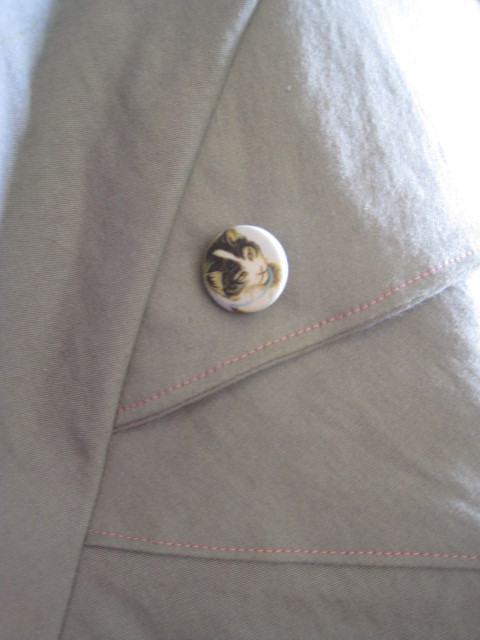 The weight of this skirt makes it perfect for transitional weather…which has yet to come to Kansas. It’s still summer here, for sure, in the 90s for the last few days. But it will cool down eventually & then this skirt will get a ton of wear. It goes with everything, it’s comfortable, & it’s one of the better sewing jobs I’ve done. I didn’t get a photo but the hems on the sides of the back wrap pieces are far & away the most perfect hems I have ever done on anything, perfectly straight, each stitch perfectly formed, about 1/16″ from the fold of fabric. Flawless! There are a few things (like the crooked cat button above) that keep me from classifying this as a perfect sew, but it’s damn close.