I am pretty thrilled about this shirt, guys!

This is the Archer button-down from Grainline Studio. As much as I love me some easy basics that I can make over & over again to build a handmade wardrobe, this was my first Grainline pattern. It seems like the general styles & silhouettes of Grainline patterns are geared toward women with less “pneumatic” figures. The Archer is a loose-fitting button-down, very menswear-inspired. It has all the classic button-down shirt elements: an enclosed yoke, a two-piece collar, separate pieces for the button placket, the curved shirttail hem. There’s also an option for some kind of ruffled butt cover, I guess to give people a more feminine option? I love ruffles, but, um, nope. Notably, there are NO darts in this pattern. & that makes it really not a great go-to option for the bustier among us.

I got this pattern as part of the Monthly Stitch’s indie pattern swap. My swap partner said that she picked it because I said I liked useful basics, & I’ve been sewing a lot of shirtdresses. I was actually really pleased to receive the pattern, because I was on the hunt for a button-down & didn’t really want to spend the money on this one myself, thanks to the dartlessness & the fact that I am a D-cup. But in the end, it wound up working really well!

I did do an FBA on this one. I used the “slide & pivot method,” where you trace off the armscye & then pivot the pattern to add more room to the bust. I was skeptical, but it worked perfectly. It’s a good way to do an FBA on a pattern that doesn’t have darts, like this one. I also added a bit of extra width to the hips, because my muslin felt just a little bit tight there.

But of course, the biggest change was all those pintucks!

I’ve been wanting to add pintucks to something for a long time, & actually prepped pattern pieces for McCall’s 6696 to make a pintucked shirtdress. I then got sidetracked by other projects. I made this Archer for the “RTW copycat” challenge at the Monthly Stitch, inspired by Patti Smith on the cover of “Horses”.

I decided to cut the front of the shirt in panels so I could incorporate flat piping made from black satin, to mimic the effect of the black ribbon that Patti has hanging around her neck. & then I realized, if I’m already breaking the shirt front into panels, this is a perfect opportunity to experiment with pintucks!

It’s easiest to add pintucks to a garment that doesn’t have darts so you’re not messing with the structural shape too much. Since the Archer doesn’t have darts, & I wasn’t planning to add any, because I wanted to maintain the boxy androgyny of the inspiration look, it was perfect canvas for experimentation. I will try to explain how I did this, but be forewarned: I may not do a great job.

First I had to figure out how many pintucks I wanted to make, so I could figure out how wide to cut my panel. I decided on six on either side, with the flat piping making a seventh decorative element. Odd numbers are just generally more aesthetically pleasing, for whatever reason. I decided to make each pintuck 1/4″ wide. Too narrow would look weird on me because I’m not a small person, but too wide wouldn’t be much of a challenge. I did a few panel muslins, trying to decide how far apart the pintucks should be. I decided I wanted a bit of space between them, but not much. 7/8″ was way too much, but 1/4″ wasn’t enough. I settled on 3/8″–the width of one pintuck with 1/8″ breathing room.

I traced off a copy of my shirt front & drew a line where I wanted the fold of each pintuck to be. I added a seam allowance for the panel & that was my basic pattern piece. I then cut along each line & added 1/2″, the width of each unfolded pintuck.

I used this taped-together monstrosity of a pattern piece to cut my panels. I don’t know if you can see the lines drawn in with purple colored pencil, but I traced those lines off on to my fabric. That’s where I folded, & I stitched 1/4″ from each fold to make each pintuck. I pressed them away from the button placket.

To make the flat piping, I just cut strips of black satin 1″ wide. I pressed it in half (as well as I could–it didn’t take a press very well) & sewed it to the seam allowance of the body of my shirt fronts, with the folded part facing toward the side seams. When I sewed the panel to the shirt body, a 1/4″ fold of satin was left visible. Easy peasy!

& since I was doing all this, I also went ahead & did all my topstitching in black thread & used black buttons on both placket & cuffs. 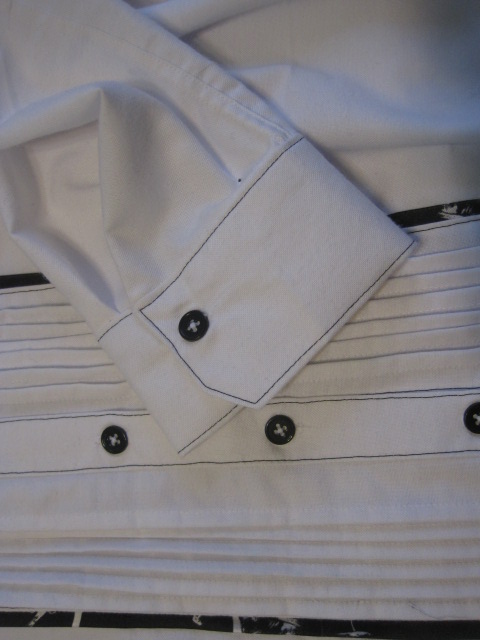 The result is a lot like a tuxedo shirt! It’s certainly not a carbon copy of the inspiration image, but it’s there in spirit. & I think I will wear it a lot more than I would a plain white shirt with white topstitching & white buttons.

To finish things off, I flat-felled the sleeve & side seams, & hemmed the whole thing with 1/4″ double-fold white bias tape, which was a bit of a struggle, seeing as my shirting material is thick, bouncy, & very prone to fraying, but it turned out surprisingly well.

Man, it took me so long to write this post. I started it this morning over breakfast, & then took a break to sew while Jared went out with Ramona, & picked it back up just in time for them to come home. I had to stop & take Ramona to a birthday party at the wading pool, & I started it again after we got home & she was eating lunch. Then I had to stop again to put her down for a nap & take a shower. I feel like it took me longer to write the post than it did to sew the damn shirt!