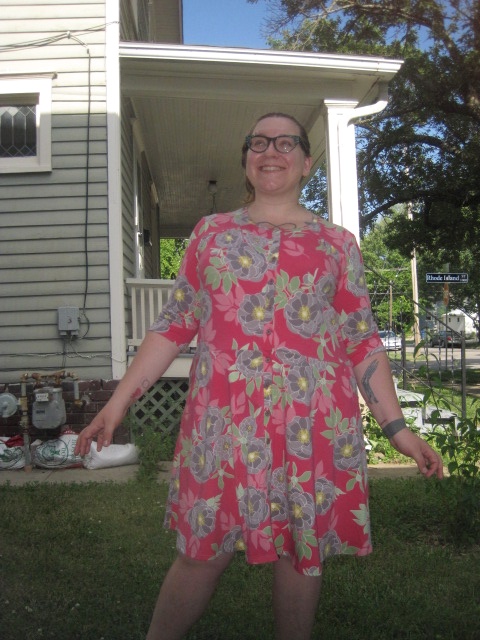 I finished this dress almost a month ago! Like I said, I have been sewing a lot more than I have been blogging lately, but I’m starting to feel anxious about my backlog of unblogged projects, so I’m going to try to catch up.

I specifically made this dress for the “hack it” challenge over at the Monthly Stitch, & spoiler alert: I love love love it. I married the Jenna cardigan from Muse Patterns to the skirt from the Kitschy Coo Lady Skater dress & created a knit shirtdress! I think this is the seventh shirtdress I have made so far this year. So in the first half of 2016, I went from having zero shirtdresses because it’s a style that just doesn’t work for me in traditional RTW sizes (narrow shoulders, large bust) to having a different shirtdress for every day of the week!

I’ve made the Lady Skater four times, & obviously a full knit skirt doesn’t pose a lot of fit challenges. But I had never made the Jenna, even though I bought the pattern over the winter, fully intending to make myself a snuggly cardigan when the weather was still cold. I just never got around to it, mainly because I was intimidated by the thought of making buttonholes on knit fabric. My shirtdress obsession has forced me to overcome any fear I may have had of buttonholes in general, but when you consider the challenges inherent to sewing knits on a regular sewing machine (small stitches sometimes result in chewed up fabric), I was really nervous about doing buttonholes.

I decided that I needed to muslin the Jenna before I dove into making my dress. If you make a button-up cardigan & there’s a bit of gaping between the buttons, it’s a shame, but not the end of the world because it’s a layering piece anyway. But if I wanted to use the pattern as a dress bodice, it needed to fit properly. No sense making an easy breezy knit shirtdress & then having to wear a layer underneath it for modesty!

Muse generally drafts for a B-cup, which is NOT me. I did a 2″ FBA. Doing an FBA on a dartless knit is pretty much the same principle as doing it on a woven with darts, except you’re guesstimating the bust apex & your slash lines instead of using the darts as a guide. Really, it’s pretty easy. Especially for me, because I usually keep the FBA width I add through the waist.

I did have to decide whether or not to also keep the length an FBA adds. I decided not to because Muse drafts for tall women, & I am on the short-ish side (5’5″). This wound up being a mistake. I needed a little extra length to get over the bust. I made a wearable muslin out of sweater fabric (to be blogged soon) & the hem isn’t even front to back. It’s wearable, but I definitely wanted something more balanced for my shirtdress. 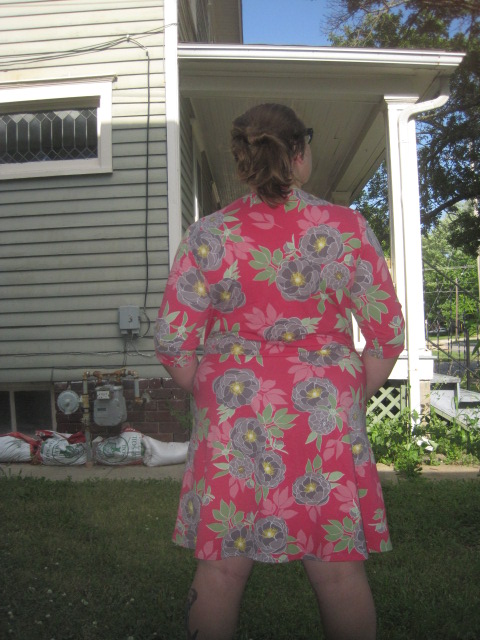 I cut the waist-length cardigan for the bodice of my shirtdress, & made sure to include the length of the hemband, which is cut as a separate piece for the cardigan. I had to add some width to the Lady Skater skirt to make the side seams match, & I had to add some extra to my front skirt pieces to create a seam allowance for attaching the button placket. I measured from the waistline of the skirt (minus seam allowance where it attaches to the bodice) to the finished hem & lengthened the Jenna button placket by that amount. I also added side-slant pockets to the skirt, because duh. Why even make your own clothes if you’re not going to add pockets? 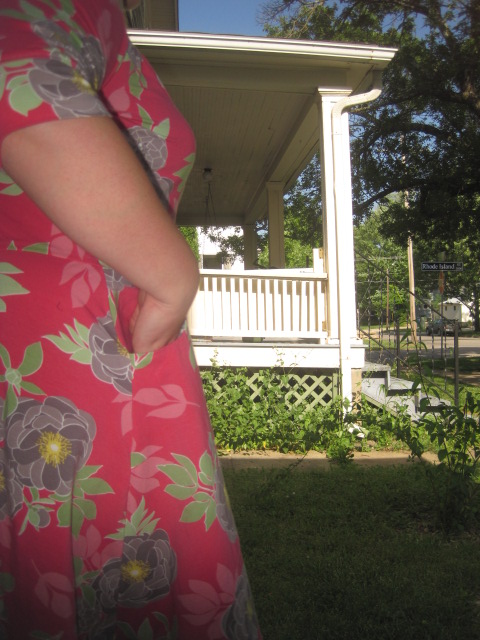 This is the first project I sewed up on my new Pfaff. I had a whole nightmare situation where the thread on the underside wasn’t catching the bobbin thread properly & was making these little loops. I didn’t several hundred dollars on a new (to me) sewing machine so I could have a worse stitching quality than I was getting with my cheapie Brother! It took me HOURS to figure out the problem. Apparently the last owner broke a needle on the needleplate, & it caused a tiny little metal burr to form on the underside of the plate. Once I figured out the problem, I just took the needleplate off, filed off the burr with a tiny metal file, & reattached the needleplate. But I was really concerned here for a while. & I spent an entire morning while Jared was out with Ramona & I could have been sewing threading & re-threading the machine, trying different bobbins, trying different needles, doing everything I could think of to fix the problem.

I think the jersey I chose, which is a different colorway but the same print I chose for a Lady Skater I made last summer, showcases the shoulder gathering on the Jenna pattern really nicely. I used gray thread for my topstitching to connect the colors of the flowers.

I also used gray buttons (& one tiny sew-on snap right at the waistline, where the dress takes a bit of extra strain when I sit down). Even with all the buttons done, I can pull the dress on over my head, but I read somewhere when I first started sewing that you should never include a button without a functioning buttonhole. Obviously it was written by someone who is a bit prissy & pedantic, & I haven’t always adhered to that rule. But since this entire dress was an experiment to see if a fully-functional knit shirtdress was possible (I worried that the weight of the button placket & skirt would weigh down the skirt & make it uneven, or that the whole thing would gape & be uesless), I chose to make fully-functional buttonholes. My machine protested a bit, but now that I’ve made a few more projects that include buttonholes on it, I have learned that my Pfaff just has a contentious relationship with buttonholes. It doesn’t stall out & make massive bird’s nest like my Brother sometimes did, but it does sometimes make half a buttonhole & then clock out. I fixed those buttonholes with tiny, tiny zigzag stitches or bartacks, & it worked just fine. 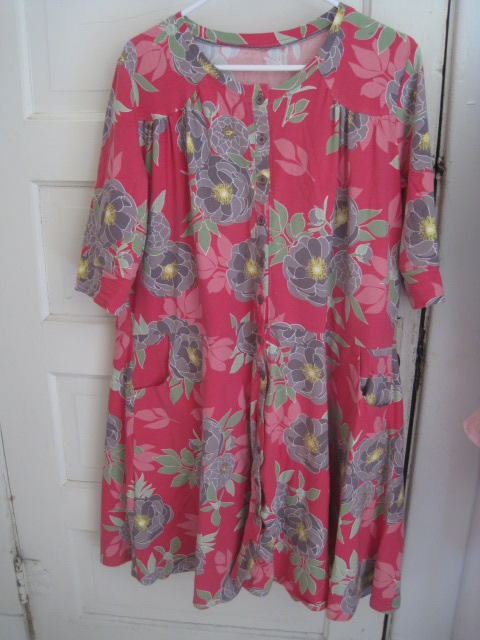 I would definitely do this hack again! The dress doesn’t have a ton of hanger appeal, but it’s so comfortable & reasonably flattering on my body. I think the finalists for the “hack it” contest are due to be announced tomorrow, & if I am among them, I will let you know!

Come to me, finalist position! Actually, I was just trying to coax Biscuit out from under the porch.