I’m so glad I finally get to show off this set! I made it weeks ago, right after the “one pattern, two ways” challenge was announced over at the Monthly Stitch. Using the Shelley bra pattern for this challenge was a no-brainer, & Jared’s parents were in town for his PhD hooding ceremony, so they looked after Ramona & gave me a lot of time to sew.

Before I really get into this, allow me to state for the record: I have historically had a viscerally negative reaction to red lingerie. I remember, like twelve years ago, one of my friends got her hands on the password to her boyfriend’s account at some “radical porn” website. Like Suicide Girls, but more actually feminist for real (I guess) & less just naked girls with tattoos. One of the photo sets was just some girl in lingerie dumping melted chocolate all over herself, which a) what a waste of chocolate!, b) seems like that would hurt, as chocolate has to get HOT to melt, & c) she was wearing red lingerie & it was awful. I know this is kind of minority opinion, but red lingerie has always just struck me as incredibly tacky.

I also do not care for polka dots. They seem to be the cornerstone of a twee kind of vintage rockabilly aesthetic that has just never been my jam. See also: leopard print, creepers, pencil skirts, eyeliner, I could go on.

But part of the magic of sewing is that you can take these things that you thought you didn’t like & transform them into something you DO like. For instance, I am working on a very fitted, structured blazer right now. I never thought I liked blazers, but actually I just don’t like that RTW blazers that fit my shoulders are too small in the waist, & blazers that fit my waist are too big in the shoulders. Sewing means I can customize for my body, & a whole world of opportunity opens up!

Anyway! So I had red Duoplex on hand. & I had this very sheer, lightweight red polka dot netting with a scalloped, lacy edge. What to do with it? To just make a basic, by-the-books Shelley, I’d use the netting in the upper cup & make the rest from red Duoplex & end up with a ho hum red bra with polka dots. *yawn*

“What if…” I thought to myself, “I used the netting on the frame?” I had some scraps of ivory Duoplex left over from an ill-fitting bra I made last year. That would work as a base. But the netting was SO light that I really needed to layer it to make the color pop. I realize what I’m saying: I needed to layer the netting to make the RED, which I don’t like, pop. Trust me, without the layering, it was an even grosser murky dried blood color. Layering was truly an improvement.

But again, it was so sheer, the polka dots on the under layer were clearly visible through the top layer, & the whole thing was just a big awful mess of polka dots. The only way to avoid it was to carefully place one layer atop the other so each & every polka dot was perfectly aligned. This also gave me an opportunity to offset the lace scallops along the bottom edge & lengthen the frame into a bit of a longline silhouette.

I cut out my layers very carefully & hand-basted them together. 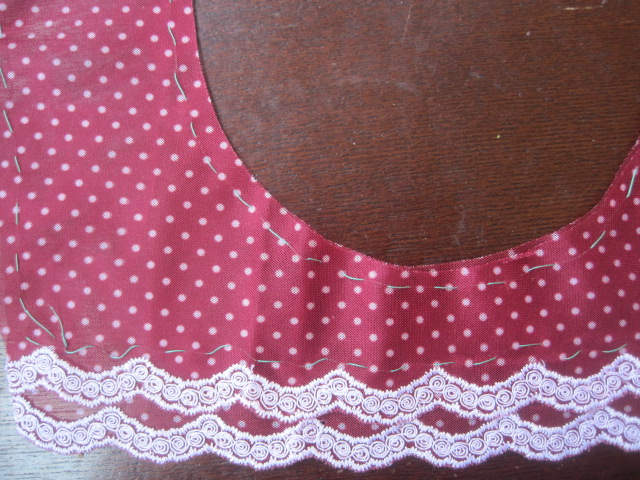 Now, what to do about the cup? I considered just plain red Duoplex, but…eh. Certainly swapping the lace from the upper cup to the frame created some extra interest, but I needed more. Then my eye fell upon the leftover scraps of Swiss dot still littering my cutting table from my Marigold dress. Beverly Johnson cautions against using wovens in bras because they fray & that makes the tiny 1/4″ seam allowances a challenge, but I got into sewing via quilting. I’m not afraid of a 1/4″ seam allowance. & I figured that I could finish the top edge & enclose the bottom edge by sewing the Swiss dot to sheer cup lining, right sides facing, & then flipping them out. The wire edge would be enclosed under the channeling & the other edge would be topstitched after being joined to the power bar. No reason it couldn’t work, right? 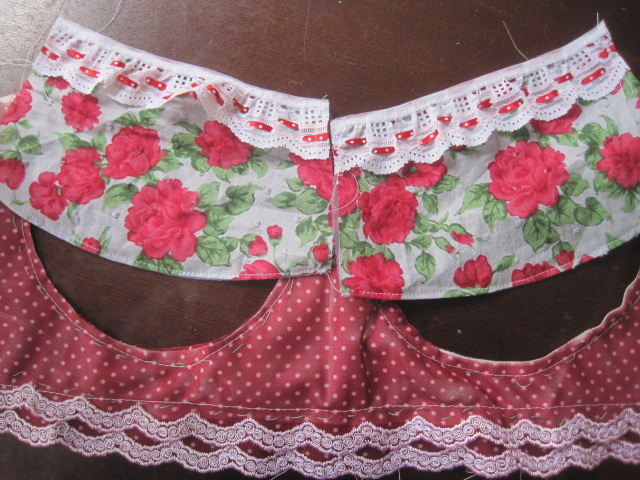 Honestly, it’s a bit more hard-wearing than some laces I have in my stash. This bra has been in heavy rotation since I finished it about three weeks ago & it’s holding up beautifully so far.

I decided to make the rest of the cup from red Duoplex, but it still needed something…maybe some lace…? If only I had plain white, I lamented. But all I have is rigid white lace trim. …But I just wanted a bit for the top of the upper cup, just to soften up all the red a little bit. Why wouldn’t the trim work? I got spools & spools of it for a song at the antiques mall a year or two ago. It’s always nice to find a use for it.

I draped a bit of lace across the upper cup & I liked it. But something was still missing…Ribbon? Would ribbon fit through the little holes on the lace? I tried it with the narrowest ribbon I had on hand (3/8″) & it was okay, but narrower would be better.

I hit the Hancock liquidation sales the next day, really just hoping to stock up on needles at discount prices, but of course I bought a trillion yards of fabric & I also stumbled across some 1/8″ red ribbon with tiny white polka dots. Totally the kind of thing I would ordinarily ignore, as I do not like red & I do not like polka dots. But I instantly knew it would be PERFECT for this bra.

I took it home & wove it through the little holes in the lace & it was PERFECT. I held it taut & sewed it in place inside the seam line to ensure that it wouldn’t snag or twist with wear (& it hasn’t, for the record!).

All that was left was the decoration on the bridge. A little bridge bling isn’t really necessary with the Shelley because the channeling at center front is finished before it’s topstitched in place, so there is no bar tack to hide. But I have a fairly wide bridge, so it’s nice to put a little something there. I found some imitation pearl ball buttons in my stash (I think they were part of a birthday present from my friend Rebecca a few years ago). I stitched them in place & voila! I somehow magically took materials to make a tacky rockabilly bra & turned into a Victorian confection! I LOVE the way it came out! & not for nothing, it really give the ladies a boost.

& there was never a question in my mind about the matching undies: of course they would have a ruffle bottom!