I’m a little behind in documenting what I am wearing. I’m sure all four of my faithful followers have been feverishly refreshing their browsers for the last week in anticipation of an update, so let’s get to it.

A nice chilly day, perfect for getting all cozy in a long-sleeved top & a sweater. I even had my act together enough to actually wear one of my matching bra/undies sets. Now that I have six such sets (a couple are still unblogged) in my regular rotation, you’d think I’d be doing it everyday, but it’s astonishing how often that ends up not being the case. I wear this sweater less often than I expected to when I made it, & I realized it’s because I had this idea that the knit was too loose & a little bit fragile. It definitely snags easily, especially when you have an asshole cat who spends at least two hours a day attacking you for no reason, but it’s a lot cozier & more stable than I remembered. I bought six yards of this stuff (at $2 a yard! I will miss you, Hancock Fabrics Spot-the-Bolt sales), so I instantly cut out a cardigan from what was left. I did end up going for a walk in the rain with Ramona, flower-peeping on the Kansas prairie (really–how is this my life?), but this outfit handled the elements pretty well. 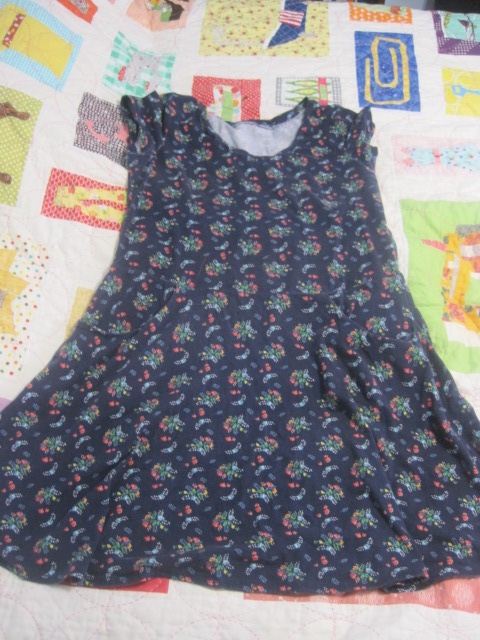 Jared & I took Ramona to her first baseball game this afternoon, the Red Sox versus the Royals at Kaufman Stadium in Kansas City. Jared had always maintained that baseball is wasted on children, but she has been watching games with him on TV since she was tiny, & she is a really sports-oriented child. Taking her to an actual major league baseball game was an experiment (they can be a little dull sometimes), but in this case, it paid off. She was really into it. I wore this dress over old RTW leggings left over from a short-lived period in my life when I thought I was going to take up running (note: it was August 2010, & basically making any resolution to move in any way in August in Kansas is going to result in a total fail) because I wanted something really comfortable & easy, since I expected to be in & out of my seat a lot, attending to the whims of a three-year-old at a major league baseball stadium. I paired it with a railroad stripe engineer hat, because we only have two Red Sox hats & both had been claimed by Jared & Ramona. We weren’t even inside the stadium yet when someone made fun of my hat.

I just want to add: I had a jumbo stadium hot dog & a platter of nachos for lunch. Oh God, I fucking love baseball lunch. The only thing that would have made it perfect was if we had been staying for the second half of the doubleheader & I could have had a beer or two. But drinking when you still have to contend with a preschooler is a recipe for disaster. 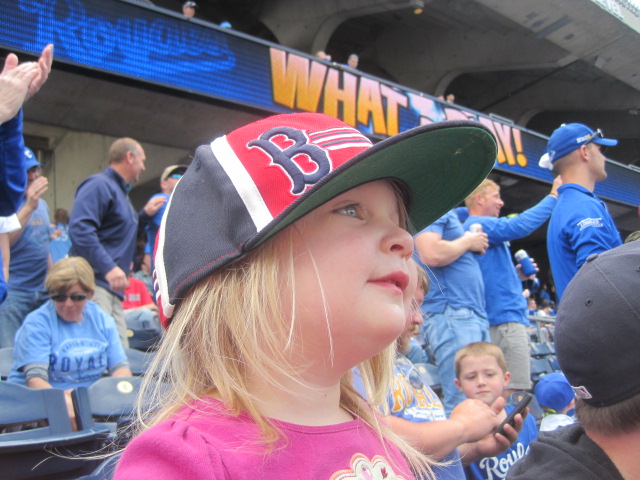 Here she is, taking in the action.

This is the closest I have ever been to the field. (Though, granted, I have only been to like eight games.) 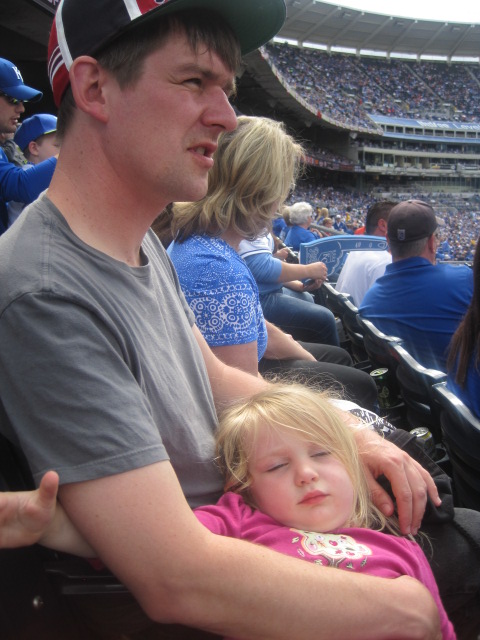 Unfortunately, the end of the game coincided with her usual nap/quiet time, & by the top of the ninth, she was really feeling it.

I busted this dress out after a long hibernation in my dresser. Um, why do I not wear it every single day? I love it! I think I semi-retired it two years ago because I put it on one morning & busted the zipper. I replaced it right away with a harder-wearing metal zipper, but I think I assumed it was too small. But it’s not. It’s just right. Obviously it bears the marks of my sewing inexperience (I made it not too long after I started sewing), but it’s perfectly serviceable, cute, & comfortable. I paired it with my Blanc tee, with which I am currently having a torrid love affair. & also, those undies have not been blogged yet. They are the partner to a bra I sewed up & will be blogging about next month. The real excitement of these undies is on the back, but we’ll have to wait for the big reveal (uh, not on my butt, just for the record).

I was exhausted all day today (which always makes me panic & think I’m pregnant–don’t worry, I’m not) & I discovered the next morning that it was because I only drank half my coffee! I always make a big six-cupper brew of espresso & drink it in two cups, but I only drank half of it today & didn’t realize. Anyway, Jared roused me out of my slumber so we could go out to eat & I suggested barbecue so we could go to this place that serves a pulled pork sandwich slathered in BACON JAM. It’s jam made out of bacon! It is so delicious. The restaurant is called Mr. Bacon & has a semi-confusing pigs-&-Bruce Springsteen decor situation happening, so I wore my bacon dress in homage.

I feel like I am writing a lot about food lately. Which also always makes me panic & think I’m pregnant. Basically, if I am ever hungry, tired, or overly warm, I freak out & think I’m pregnant. Even though the last time I was pregnant, I chugged along for two & a half months without even realizing it. Which is probably why I am so ridiculously hyper-vigilant about it now. 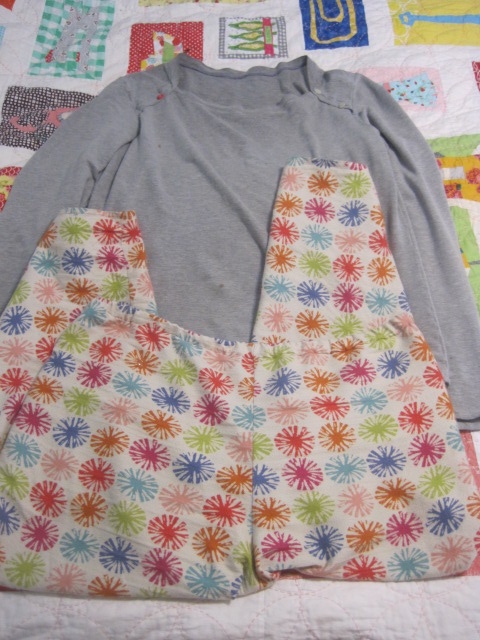 I didn’t mean to spend all day in my jammies, but that’s what happened. Luckily, I made them myself. I was wrapping up some commissioned sewing & just never got around to getting dressed today. But here’s what I made:

It’s a pretty simple elastic waist skirt, but I made the waistband a separate piece, enclosed on the inside, & the sides are French seamed. The whole thing only took about 45 minutes, start to finish, but it’s a pretty tidy little bit of sewing. 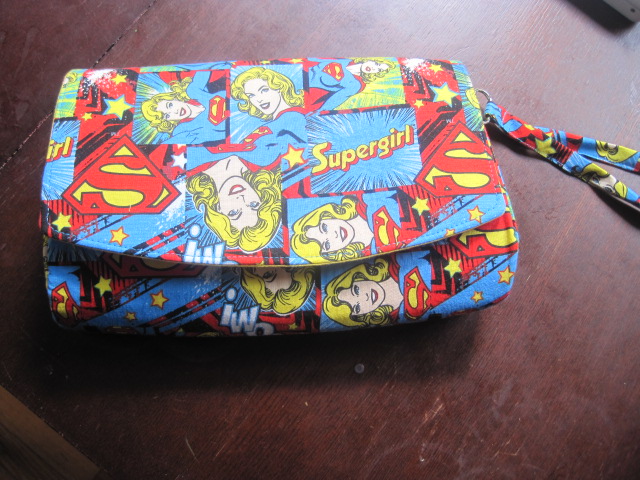 & a little clutch. The woman who commissioned the projects chose the fabric. It’s not my particular jam, but I still think this came out really cute.

This godforsaken zipper pocket gave me no end of trouble. Maybe it was my experiment in accidental caffeine withdrawal, but I sewed the lining in & ripped it out literally like five times before I got it in the right way. Of course, now that I know how to do it, I kind of want to make one for myself, even though a clutch is not really appropriate for my lifestyle.

& one more thrilling bit of news: I got a new sewing machine!

It’s a Pfaff Ambition Essential. I bought it off Ebay for a pretty nice price. I had to take a coping saw to my sewing table to get it to fit, but it’s all tucked in now & I have been playing with it. The stitch quality is absolutely to die for. It’s such an amazing change of pace to trust that the stitches will look as good on the back as they do on the front. I cannot wait to sew jeans on this thing & see how they come together. A new machine was really not in the budget, what with our impending move to Old West Lawrence, Ramona starting preschool in August, the fact that I personally boosted Canada’s economy by about 5% with all the bramaking supplies I’ve been buying, etc. My savings account is on life support. But I love my new machine!