I made a swimsuit! This is another in the long line of projects that I wanted to tackle last summer, that got put aside when I found out I was pregnant again. No sense sinking a bunch of time & energy into fitting things like jeans & bras & shirtdresses & swimsuits when I’m about to gain sixty baby pounds (if my pregnancy with Ramona was any indication). & then I miscarried & going back to those projects was too hard a reminder of what I had lost.

The due date with that pregnancy was in February, & since then, I have been gradually getting back into tackling those projects. Before I learned I was pregnant last spring, I made a pair of swim bottoms that fit really well, but the coordinating top was a hilarrible fail of epic proportions. It was downright unwearable. My original plan was to eventually make a wearable top to go with those bottoms, but then I took Beverly Johnson’s Craftsy class on “constructing the supportive one-piece” & it inspired me to try a one-piece suit instead.

I poked around looking for patterns for a while but nothing really caught my eye. I liked the ruching & high-coverage bottoms of the Closet Case Files Bombshell suit, but I didn’t care for the top or the halter neck. I thought about trying a Pin-Up Girls suit since I am loving my Shelley bra pattern so much, but I didn’t want to deal with shipping from Canada.

To get the basic proportions of the suit, I followed the instructions on the site. But I knew I wanted something different in the back, & I really wanted cut-on straps instead of having them be separate bits. So once I had the gist of the basic draft, I got a little creative with the style lines.

Good God, look at all that preschooler chaos. Well, no one can say this blog doesn’t reflect reality, right?

Relevant to my design decisions is the fact that this month’s challenge over on the Monthly Stitch is “Inspiration Nation”. I have been contributing over there since January, & it’s been pretty fun. It’s pushed me to be more creative with my sewing, for sure. But this challenge had me stumped. The brief was to make a garment inspired by any previous post on the blog. But I have only been following the blog for a few months & couldn’t think of any post off the top of my head that had really sparked major inspiration.

I spent a lot of time scrolling through the archives before I finally hit on this post. I thought the way this woman designed the back of her daughter’s swimsuit was really clever & creative. I love a high back on a suit, & mimicking that triangle cut-out would give me a little platform for a bra band that looks more like a design feature than a bit of utilitarian construction. I knew I didn’t want my suit to tie at the neck, but it wasn’t difficult to just sub in a G-hook.

There are certainly things I’d do differently in terms of both construction & design if I were to make this suit again. I think a two-piece bodice with some gathering between the cups would be better than the little tie on this suit. 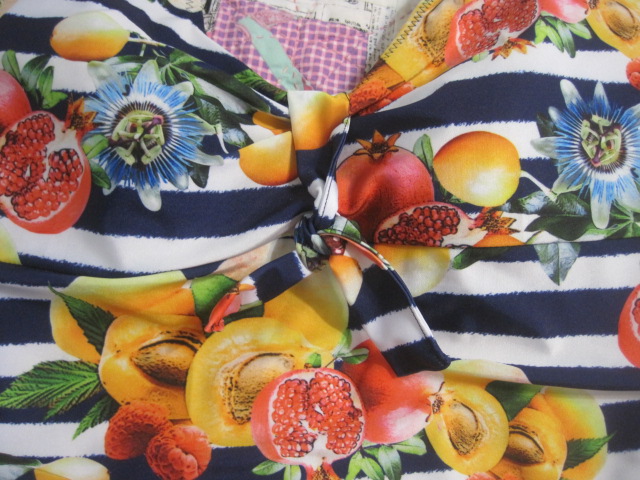 With such a busy print, you can barely even see the tie.

I’d make the bra band in the back a little wider, & generally just go hog wild with the elastic. The front straps in particular would benefit from some elastic under tension holding them back to the body. I would also shorten the ruched panel on the front just a little bit & hem it differently. The three-step zigzag looks a little Becky Home-Ec-y.

But in general, I am very pleased with the suit. While some elements of my construction have room for improvement, the fit is stellar. Everything is all tucked in & covered. It’s comfortable, I can move in it, & I don’t feel like I’ll be scandalizing anyone at the public pool. Some might say that a woman of my size should maybe re-think such a deep cut-out in the back, & to those people I say, fuck off. I am not a big fan of stripe-y prints, nor of florals, but for whatever reason, I really like this print a lot. I bought it last year, maybe from Spandex House?

Front of the suit.

A closer look at the ruched panel. A little goes a long way when it comes to ruching!

& of course, this brings me to perhaps the most challenging part of construction: the built-in free-floating bra. This is basically the whole point of Beverly’s swimsuit class, or at least, that’s why I bought it.

Most RTW suits have a basic shelf bra, which might work okay for a small &/or self-supporting chest, but neither of those adjectives describe me. I tried pre-made cups in the failed suit from last year. So this time I went all in & constructed an interior bra. I used my trusty Shelley pattern (even though it’s more pieces to sew together) & made foam cups. (This was my first time sewing foam, by the way!) I covered the seamlines with scraps of the swimsuit fabric–a little tip from Beverly’s class. I could have just left them, since the bra is hidden inside the suit, but… 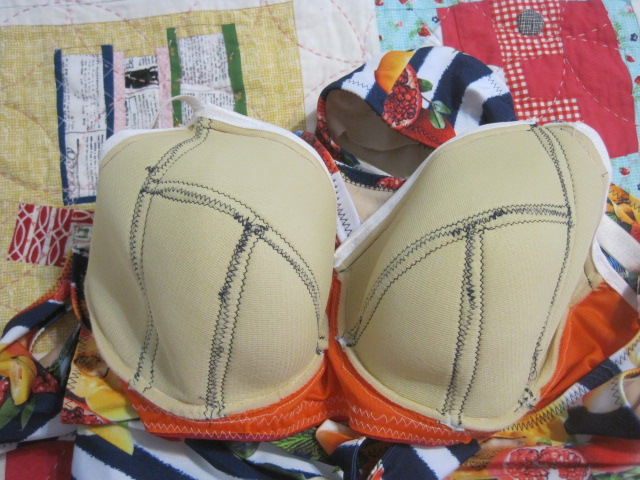 Yeah. The naked seams were not really so beautiful. & sewing the strips one was really no challenge.

I used satin ribbon to stabilize the edges because it’s all I had on hand, & I used orange Duoplex for the frame because…I had orange Duoplex. I don’t really care orange. Not sure why I bought it. So I was willing to donate some to this experiment in swimsuit support, especially because it actually coordinates nicely with the colors in the suit. I used red band elastic & channeling for the same reason. & I did add underwires, because why not. 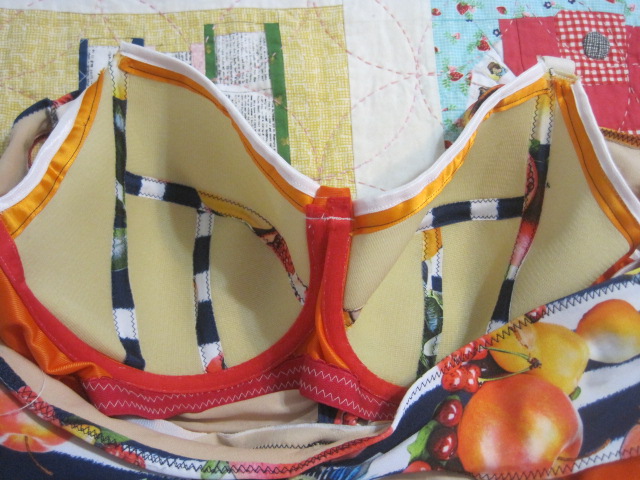 Getting into the suit & getting everything all tucked away where it’s supposed to go is a bit of an endeavor, but once I’m in, everything is great! I even forgot I was wearing it this morning when I put it on to take photos & was just wandering around the house, checking the mail, petting the cat, etc, while I wore it.

This is my back pattern piece. Kind of a weird shape, huh? But it was all cut in one piece. 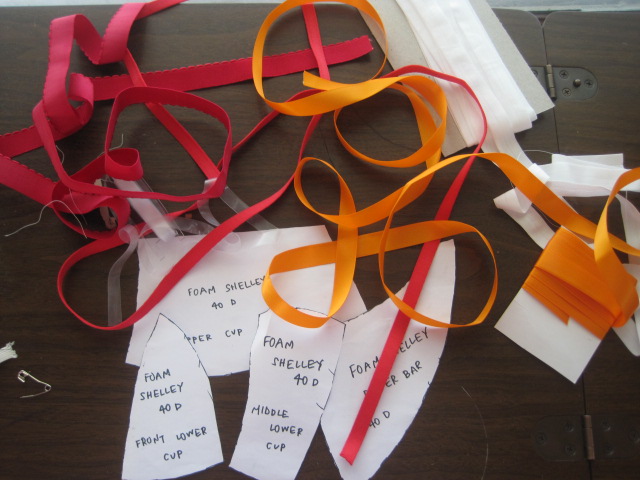 My sewing table this morning. What a disaster area. & with Indie Pattern Month coming up, & the fact that I recently decided to make myself available for commissions, I wonder if I will ever have a tidy sewing area ever again.