i have been sucked into another big sewing project. i fully intended to take a break & stick with instant gratification one-day projects for a while after working my fingers to the bone on the hand-quilted paper-pieced quilt. i didn’t use a thimble consistently while i was quilting that beast, & the skin on my thumb is still peeling off. isn’t that a beautiful image? for a few weeks, you could actually see fresh pink flesh between the big cracks of dead skin. it’s a lot better now, but i have learned my lesson: use a thimble, dude.

anyway, my new big project is a winter coat. although it’s considerably less time-consuming than the quilt, it’s still not a quick project.

i’m making mccall’s 6800, view D, which is the blue coat on the pattern envelope. it has twelve princess panels, two-piece set-in sleeves, in-seam pockets, a funnel collar, & a detachable hood. during the veterans day sale at hancock fabrics, i snagged this gray plaid wool blend for the exterior & pink satin for the lining. i also bought some button-covering kits & a roll of batting to underline the body of the coat for extra warmth. since this is the first coat i have ever made, i decided not to splash out on anything too fancy. i’ve seen people on the internet using lambswool & hair canvas, but i decided not to spend big money on luxury materials for a coat that i might totally fuck up during construction. i think it’s crazy enough that i’m using plaid across twelve princess seams!

i dove in last friday & tackled the FBA. my high bust measurement indicated that a size 16 should fit perfectly through the shoulders, but i needed extra room in the full bust & waist. i used mary’s princess seam FBA tutorial as a starting point & added 2″ (for a total of 4″). i only added the extra width to the front side panel, since i guessed that that’s more or less where the bust apex would be. i kept the width & added it to the waist & then added extra length to the two other front panels to make everything match up.

my goal for last weekend was to make a muslin. i assumed it would take forever because, you know, it’s a great big coat with twelve panels! but now i see why mccall’s categorizes this pattern as “easy”. it actually only took me about an hour to sew it up. if a person was just doing a basic coat with no interlining & machine-made buttonholes, this could easily be a weekend project, even including cutting & marking.

i sewed my muslin out of an old wool blanket to mimic the weight of the coat materials, & tried it on over a sweater, like i would wear the finished coat. & lo & behold, it fit just about perfectly! i felt like maybe there was a little excess fabric in the upper middle chest, but i was reluctant to mess with it too much because i don’t know how it will fit once facings & closures are in. the shoulders fit perfectly as is, so i didn’t want to mess with the chest & inadvertently make an alteration that would cause pulling in the shoulders.

since the muslin was so quick to come together, i decided to futz around a little with plaid-matching across all those seams. i decided to only worry about matching the top. the skirt is so full & voluminous, any matching or non-matching that happens there will just be lost in the folds of fabric.

i decided to try to match at the notches where the front panels come together, & then across the upper sleeve. i matched the undersleeve to the upper starting at the hem, & matched the back across the upper sleeve starting at the shoulder. once i got into the groove, it was pretty easy. i bought an extra 3/4 of a yard for pattern-matching, which wound up being more than enough fabric, even with the width & length additions. 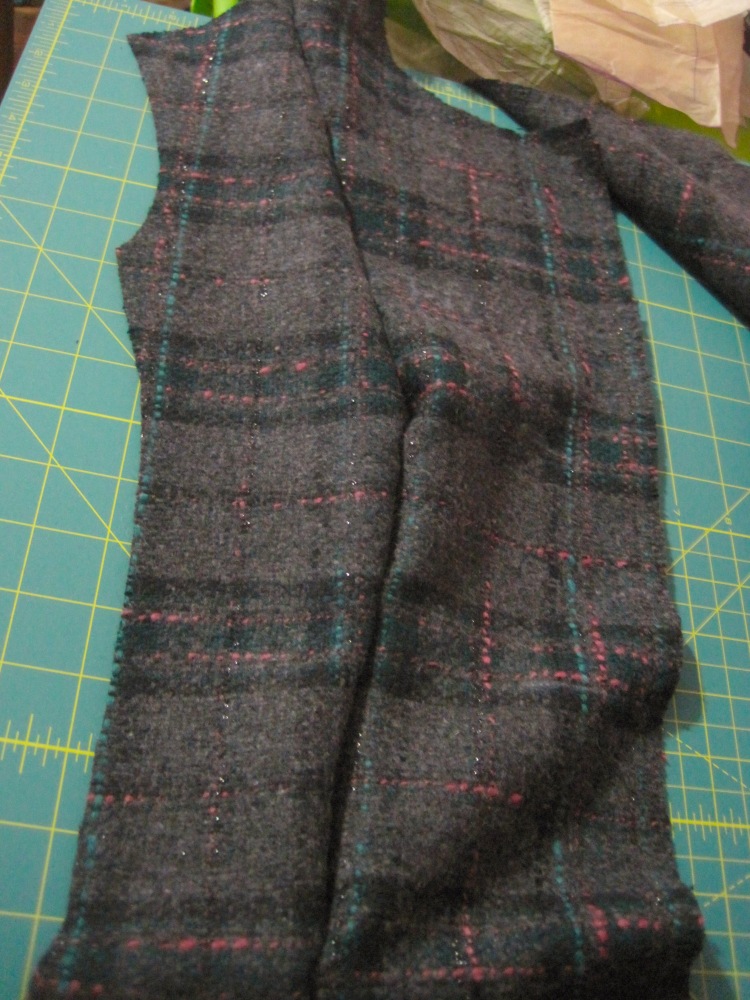 i spent another day zigzagging the batting interlining to the satin lining, & then i sewed the lining back together to use it as a pattern for drafting a back stay. the pattern includes steps for interfacing the collar & front, but i also added interfacing to the hem & back. my wool has a tendency to want to stretch, so i’m hoping this will help it hold its shape better.

incidentally, those lines you are seeing aren’t puckers. this thing is pucker-free. the satin just has no stretch whatsoever, so it resolves into little wrinkles at the curves when it’s hanging free likes this.

at some point along the way, i lost my mind & decided to do bound buttonholes. not just down the front (where i am adding an extra button, since i added 3.5″ of extra length during the FBA), but also on the hood, where six buttons attach the hood to the coat. so there will be thirteen buttons altogether. i barely even have any experiencing doing regular buttonholes on my machine! forget bound buttonholes!

but i came across a dritz bound buttonhole maker on the notions wall at hancock. for $4, why not try it? i googled it after i bought it & discovered that it has been out of production for a long time, & vintage buttonhole tools from the 60s were being sold for like $50 a pop on ebay. apparently dritz just started producing them again like maybe a year ago.

the directions were really intimidating. there were like 24 steps. i practicedwith scraps of my coat fabric &…it was actually insanely easy! yes, a bit time-consuming, & yes, it’s terrifying to take scissors to your garment & slash it open. it’s also counter-intuitive to me to sew on to the front of the garment. but my samples turned out pretty well!

i’m a little conflicted. should all the buttons be covered in the same fabric? if so, should they all be black or should they all be pink? i was planning to use my coat exterior fabric in the bound buttonholes, but what if i used the pink instead? the problem there is that they’d stand out a lot more, & if they came out janky, that would be an issue. plus i already cut out all the squares to use the plaid wool.

anyway. i’m hoping to finish the coat by the end of the weekend. i’ve been trying to only work on it during ramona’s naps or when she is with jared, since i kind of checked out of my momming duties while i was finishing the quilt. ramona doesn’t mind when i sew, but i don’t want to push it too much. wish me luck!

3 thoughts on “winter coat in progress”