this is jared holding it up for me, fresh out of the dryer!

before i go any further, allow me to mention that i’ve decided to enter this quilt into the blogger’s quilt festival hosted by amy ellis, in the hand-quilted category. click the link, check out the other quilts, & if you wanted to kick a vote my way, i wouldn’t mind at all!

so let’s talk details. all the blocks in this quilt are from penny layman’s amazing book the paper-pieced home. i bought a copy in june & couldn’t decide which block i liked best, so i made them all! it took me about four months, though i did have to take a break when we moved & all my sewing stuff was packed up for a few weeks. i also didn’t sew much while i was recovering from my miscarriage in july.

there are over 110 different fabrics in this quilt, & i have no idea how many separate pattern pieces went into all of the blocks. a few thousand, for sure. i blogged about the blocks as i sewed them up over the last few months, talking about fabric choices & whatnot. some of the blocks feature extra details, like applique or embroidery. you can click on my things i’ve sewn link & look through the archives for more details & individual photos of each block.

penny includes instructions for several different projects that can be made from her blocks, but no quilt pattern, because she probably never expected someone to make all forty blocks! so i came up with a layout on my own. i mocked up the blocks with graph paper, coloring them with their dominant colors, & moving them around a graph paper quilt top mock-up until i had an arrangement i liked.

i laid the actual blocks out & made a few adjustments. 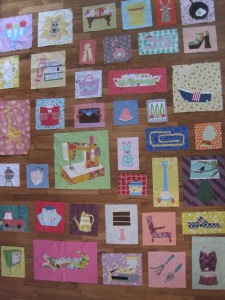 it took me about four days to sew the quilt top together. there were a lot of Y-seams, because the blocks are all different sizes. there was no way to do a traditional grid. i used kona snow to make all the blocks pop, & because every single one includes a little bit of white. i’ve never used so much white in a sewing project before. i usually avoid it because i have a two-year-old & it’s tough to keep white things looking nice with a little kid romping around. but i decided to just go for it, especially since this quilt is for me & not her! 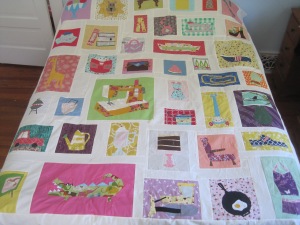 this is the finished quilt top on my bed! it’s bigger than a full-sized quilt but smaller than a queen. it’s about 300″ around.

so then i had to quilt it. i backed it with pink minky because i made a minky-backed quilt for my daughter last year & we both loved how soft & snuggly it is. but minky stretches & that means it is challenging to quilt on a machine, even with a walking foot. it’s really difficult to get it to feed evenly. in fact, when the owner of my local quilt shop learned i was using minky, she was horrified & disgusted. whatever, man. with so much happening on the quilt top, i knew i wanted to keep the back simple, with no crazy scrap piecing like i usually do on quilt backs.

my reasons for hand-quilting were both practical & sentimental. i knew hand-quilting would be easier than machine-quilting with a minky back (more control & precision), & after sinking so much time into making the top, i wanted to put just as much effort & care into the quilting.

i was also really conflicted about the quilting motif. i thought about coming up with a quilting design individual to each block, but decided i wanted to do an all-over design to bring more unity to the blocks. i thought about a basic grid, but…yawn. i always love pumpkin seed/orange peel designs on other people’s quilts, but have never attempted anything so ambitious. after putting so much effort into my blocks, i was really worried about biting off more than i could chew with the quilting & wrecking the whole thing. like a lot of people who make quilts, probably, i am a lot better at sewing/piecing than i am at quilting!

but, like choosing to go with white sashing, i thought it over & decided to just go big or go home. because the smallest blocks in the quilt are only 4″ or 5″ across, i decided to make my pumpkin seeds from 6″ diameter circles. i used a fixion pen to make a grid & used a toy plate of my daughter’s to draw the curves. just drawing the motif took me three days, so i was pretty terrified to think of the time i was going to have to sink into quilting.

i bought a spool of pink aurifil 28 wt., but after like eight stitches, i knew it wasn’t working for me. i picked the stitches out & tried machine-quilting, but i just hated how it was coming out. i picked those stitches out too & put the quilt away for a few days while i recovered from a carpal tunnel flare-up.

in the end, i decided to do sashiko/big stitch quilting, & i wanted a thicker thread to use for that. neither sewing shop downtown had the perle cotton i was looking for, but the yarn shop had this really delicate lace-weight silk yarn in variegated pink shades. i bought a skein & took a few practice stitches.

LOVE! & thus began two weeks of doing practically nothing except quilting. i actually kept track of how many hours i spent quilting: 62. by the end, even with a thimble, the tips of my fingers were bruised. i mean, a paper-pieced block is generally going to have an awful lot of thick seams where several pieces of fabric are overlapping, especially where there are really tiny details rendered in fabric. it was a lot of work to get the needle & yarn through those sections.

but i think it paid off! i love how this quilt came out! 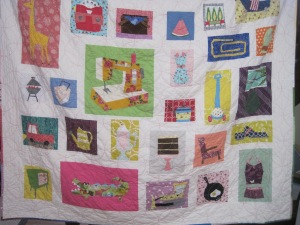 this is more of a detail shot. ultimately, more than 30,000 hand stitches went into the quilting. 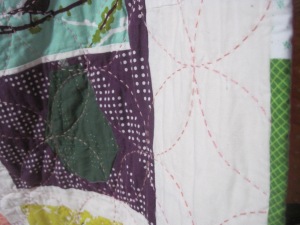 i also love my binding. i pulled about fifty of the fabrics i used for the blocks & arranged them in rainbow order. 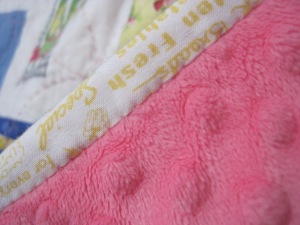 & this is far & away the best hand-stitching i have ever done on a binding back. granted, this is only the seventh quilt i have ever made. but still!

& here’s the finished quilt on my bed! now i just need the weather here in kansas to cool off a little so i can actually use it. in the meantime, i better attend to ramona. she’s having a meltdown because she got to watch more than a few taylor swift videos while i quilted, & she’s very distraught about that toddler gravy train coming to an end.