we are working on settling into our house, & i’ve managed to scrape together a few hours here & there to work on more paper-piecing projects. let’s go to the tape:

vintage TV. i thought it would be kind of fun to fussy-cut some of the unicorns & rainbows fabric left over from last spring’s cambie dress. i almost never wear that dress, by the way. i think it was the third dress i ever made, & i made it before i knew about things like FBAs. i cut the size that corresponded to my full bust measurement, so the shoulders are enormous, & i always feel like i’m flashing people, even though the mirror tells me that everything is covered appropriately. i still like that design. maybe i will make it again one day & try to achieve a better fit. 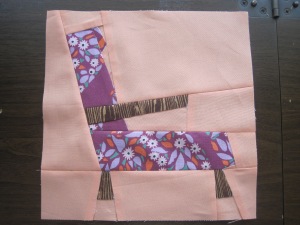 a lovely armchair. the purple fabric was left over from the bench cover i made last year. this is part of why i like paper-piecing. you can bust a lot of random scraps. & of course i had to use more wood grain print. incidentally, these photos were taken in my new sewing area, which is right in front of an enormous picture window. our new house is much brighter than our old house, which was surrounded by trees & always kind of dark. the natural light really helps you see all the seams in these blocks, which is kind of cool. i feel like people who don’t sew see these blocks & they’re like, “cool, a unicorn on TV,” or, “oh, it’s a chair.” hopefully people who do sew are like, “holy hell, that’s a lot of seams, & a lot fiddly little bits that need to be matched up perfectly!” 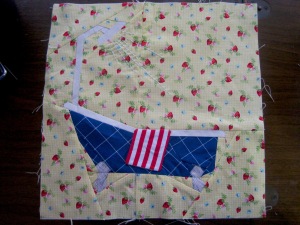 this clawfoot bathtub, for instance, involved over sixty different bits of fabric, & the striped towel is an applique, & i embroidered the water coming out of the shower. the whole block is a 12.5″ by 12.5″. i follow a fair number of quilting/crafting blogs, & it seems like they are also having features on “fast quilt designs” that use giant blocks that necessitate fewer than sixty pieces of fabric for the entire quilt! i see the utility in that, like if you really need to whip something together for a baby shower or something. obviously a block like this seems like an almost comical degree of work, considering that it is just going to be folded into a large quilt with 39 of its brethren. in any case, i chose that blue fabric for the tub in homage to the clawfoot tub at our old house. we only have a shower in our new house, & every night is a new adventure in convincing ramona to use it for long enough to get at least half-clean. 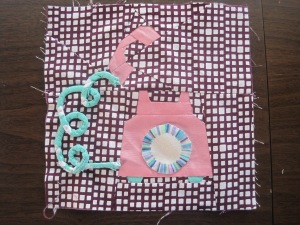 this was my first shot at the old-school rotary phone. the pattern suggested embroidering the telephone cord, but i really did not care for the included embroidery pattern. it looked really scribbly & just…not my jam. i’ve put some 3D elements into other blocks (like the ribbon tie on the fancy women’s shoe, & the lace on the oven mitt), so i decided to use piping to make the phone cord. unfortunately, i didn’t have any of the really slim piping i prefer, which is only sold at the sewing store out on iowa street, which necessitates a car trip, & we’ve been having a lot of car issues lately…in any case, i just used what i had & it looked okay-ish when it was done, but i didn’t really like it.

so yesterday i took ramona to the indie quilt shop downtown (our new house is only three blocks from our old one, so we still live in downtown lawrence–yay!) & we dug through the big basket of embroidery floss they have until i found the perfect shade of blue-green. it was all the way at the bottom, maybe the only skein in that color. i cut off the shitty cording & freestyled my own embroidery pattern. 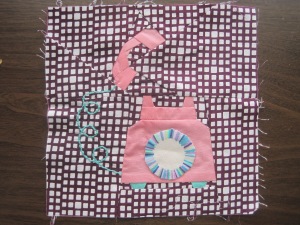 the natural daylight washes it out a little, but i think we can all agree that this looks MUCH better. & i really love how the “dial” came out. it’s fussy-cut from some tula pink “pineapple” fabric & wound up being exactly the right scale. 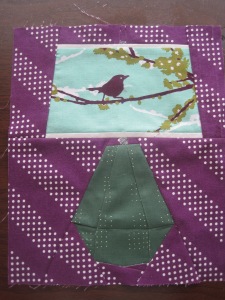 & this is a lamp. when i showed it to jared, he said, “it’s a window! &…a jewel shape? that is happening here?” if you look closely, you can see a little bit of black & white crosshatched fabric connecting the shade to the base. but because the purple background & the green base are so dark, that connecting piece kind of blends too much. oh well! i think the geometric lines of the base are really clever. sewing them necessitated L-seams, which look like they could stand to be pressed one more time, but i love the way the seaming creates a more three-dimensional effect.

i’m halfway through the forty blocks at this point, & already panicking a little about how i’m going to lay it all out & quilt it. i’m so worried about wrecking it during the quilting process, since i am not a great quilter & each block requires at least a couple of hours of work. i’ve given a lot of thought to hand-quilting it, but i still don’t know what design(s) to employ, what color(s) thread to use…should i do an all-over design or something individual to each block? should i maybe only quilt the sashing? but i really want to do some quilting over the seams in the blocks to add stability. plus, some of the blocks are pretty big. but i don’t want to quilt over embroidery or 3D elements…well, i still have twenty blocks to go, i guess i have plenty of time to worry about it.