hey, i’m still alive! we’re moving in less than three weeks & i feel like life is a little bit hectic right now, so i’ve been kind of checked out blog-wise. i’m also not really doing any sewing aside from blocks for my big paper-pieced quilt, & i haven’t even been working on that very consistently because i’ve been so busy packing & napping & dicking around on the internet. but here are my five most recent blocks.

women’s fancy shoe. i was not super-stoked about this pattern. that’s why i chose kind of a strange mix of fabrics for it. orange & green & brown & gray & ivory? but it actually turned out better than i expected. the sample photo in the book used a barftastic orange plaid for the sole. (i dislike orange & i’m not really into plaid, so let’s call it subjectively barftastic). it just wasn’t speaking to me. but this block is kind of a testament to what a difference fabrics can make. i also swapped out on piece of the shoe for a bit of background fabric to turn the shoe into more of a slingback than a big ol’ platform clodhopper. the pattern also called for embroidering a shoelace, but i’m not that experienced with embroidery, & i had this little scrap of ivory ribbon, so i used that instead.

men’s fancy shoe. this is another pattern that isn’t really my jam. it’s a little too angular, pointy, & mid-century modern for me, but i gave it a whirl anyway. to be honest, i don’t super-love the way it came out. i used navy for the shoe body even though i just don’t really care for navy. then i used gray for the sole, which wound up being a little too close in shade to the navy. i really don’t like the red & white stripe detail. i regret not using a solid for that. but to my surprise, this block got a very positive response when i posted it on facebook. people were saying it was their favorite block yet! so who knows? maybe i’m just being too critical. i do like the yellow fabric i used for the background. 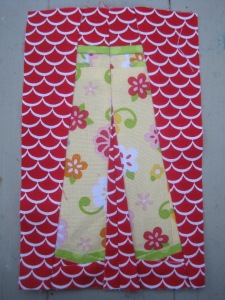 this block is called “those 70s pants”. another design that did not overwhelm me with excitement. but it was definitely another chance to pair some funky fabrics. jared was like, “…yellow with flowers & green polka dots?” to be clear, if these pants were actual pants, i would be very unlikely to wear them. but the point isn’t necessarily to use fabrics to piece something you’d want for yourself if it was real. i think the fabrics i chose capture the essence of the block design. i do fear that the background fabric overwhelms it a bit, but that’s kind of just the nature of red. red is always a little harsh to my eye.

beach bag. i had a hard time choosing fabrics for this block. usually i go in knowing at least the general colors i want to use, or knowing i want a specific print scale. i tried a million different fabrics before i settled on this combo. ultimately i decided this bright gingham would be good for the body of the bag–& it’s worth noting that this photo really does not capture the vibrancy of the colors. the gingham is purple & hot pink & it is BRIGHT. i had a matching hot pink solid to use for the handles, & the accent colors in the aqua jellyfish fabric i used to make my princess seam sailor dress last summer coordinated as well, so i used that for the zigzag element. i went with newsprint fabric for the background to balance the bright colors a little. ultimately, i don’t love the jellyfish fabric as it is deployed here, but…eh, it’s all right. this is a bag i might actually carry in real life, if it was real.

another very mid-century modern design, this time a couch. there was no question about using wood grain print for the legs, & then i remembered i had some scraps of this hexie fabric left over from a quilt i made for ramona couple of years ago. i found a small-ish scale red & white polka dot print in my stash that coordinated really well with the red & white polka dot hexies, & i pulled a lime green solid for the cushion. at the end of the day, i kind of wonder if a green couch with a hexie print cushion might have worked better (i don’t love the places where the solid red hexies are bleeding into the polka dot background), but honestly, if i was in a furniture shop & saw a hexie print couch, i would buy it in a heartbeat, so.

i have several more blocks in various stages of completion. my original thought was that i could get all forty blocks done before we move–maybe even finish the whole quilt top. but now i’m thinking that’s really not the best use of time, & kind of unrealistic to boot. i mean, packing is going fairly well–a lot better than i expected it to go with a two-year-old underfoot. jared has cleaned out the basement & the attic & we decided to go ahead & splurge on movers because it turns out that such a thing is much more affordable than i expected. i mean, if you have a choice between renting a truck & exhausting yourself moving everything yourself & then spending the next week trying to recover while chasing after a two-year-old versus paying a couple hundred bucks to have professionals take care of it for you, i think professionals are the way to go. particularly if you are in your mid-30s or older.

& speaking of older, i turn 36 on saturday. my birthday has kind of snuck up on me this year, i guess because i’ve been more focused on the move & on the day to day responsibilities of looking after ramona. i don’t know if i’m feeling particularly impatient right now for some reason, but oh my god, her nap/bedtime routines make me want to die. she likes to sit on my lap & drink a sippy of milk before she goes into her crib. sounds okay, right? how much milk does a sippy hold? like maybe four ounces? so HOW does it take her 45 minutes to drink it? & i’m just sitting there the whole time being like, “no, i don’t want to drink your sippy. please don’t stick your fingers in my mouth. leave my glasses alone. stop scratching me with your toenails. watch your elbows, please. can you please just focus on your milk. no, i’m not going to sing ‘the wheels on the bus’ right now.” i honestly think she is at least 80% elbows, judging by how she manages to dig them into at least five different parts of my body simultaneously any time she’s within ten feet of me.

& we’re looking into buying a new (used) car! so instead of being able to collapse on to the couch in a heap with a copy of “threads” magazine or something tonight when jared gets home, we are driving to topeka to test drive a car in a CVS parking lot. as our friend bart said, “that car is gonna have  a lot of sudafed in the trunk.” a CVS parking lot in topeka is pretty much the last place i want to go today, & i don’t love the idea of dropping $2000 i don’t have on a new car, but…it will be nice to possibly own a four-door car. maybe something a little quieter than our current car.