i have other projects i was going to blog about first, but i really need to vent about this one.

the finished product looks pretty damn great! but getting to this point was kind of a disaster.

this is the alder skirt, designed by imagine gnats. the main thing that attracted me to this pattern was the pocket detail. of course i prefer clothing with pockets, & i liked that these were a different construction for me, not just another in-seam pocket. i added the aqua piping along the top of the pocket, after considering just about every single fabric in my stash. i originally wanted pink piping, but this aqua just spoke to me when contrasted against this dark viewfinder print ( from the “playful” collection by melody miller–i told you you’d be seeing a lot of this stuff).

the alder skirt has quite a wide size range, all the way up to 22 (46″ waist & 56″ hips). the pattern said to skew toward your size based on hip measurement if you are between sizes, but i ignored that advice because i have proportionally narrow hips compared to my waist. lots of things fit my hips but not my waist. so i took a gamble on a size just a bit smaller than my waist measurement (& several sizes bigger than my hip measurement).

there are two versions of this skirt. one has little pleats in the center front, & one is flat. i opted for flat because come on. the last thing i need is more floof in the tummy area. there’s also an option for flat pockets or pockets that are pleated on the inside so they stand out from the skirt a bit. i opted for flat pockets because the 3D version reminded me of this crusty punk traveling dog i once knew who carried his own supplies in saddlebags. it was a good look for him (they were screenprinted with his name & the words “i’m cute but mean!”), but not for me.

as i began construction, the first problem i ran into is that the pocket pieces didn’t quite come together properly. i checked & re-checked, but i didn’t make any cutting or sewing errors. they just would not lay properly. if they were flat along the side seam, they didn’t line up along the middle seam & vice versa. there were notches i was supposed to match, so i decided to just match them & hope for the best, even though they made the sides look weird. i hoped the sides would somehow be magically fixed once the side seams were sewn.

the next problem i had was the waistband. it was just straight up way bigger than the waist of the skirt. i liked the construction details, the fact that you are tucking in the raw edge & finishing it while you’re topstitching. & the instructions for inserting the elastic in the back were clever & also provided a nice finish. but there was no getting around the fact that the waistband was literally several inches bigger around than the skirt.

i also had a problem with the elastic. the pattern does not specify if the length of the elastic should be stretched or unstretched. maybe it should be obvious from context or something, but i cut unstretched just to be on the safe side. & in the end, i cut that length almost in half to end up with a skirt that fits. so i think she the lengths she lists are for stretched elastic, & it would be nice if the pattern specified.

i sewed the whole thing up & put it on &…oof. not great, bob. the pockets gaped open, there seemed to be a ton of extra material bunching up along the sides…the whole thing was just really unflattering. i showed jared & he was like D: . i really should have taken a “before” picture, but i just immediately dove in with my seam ripper.

so. i took off the waistband & unpicked the side seams. i re-pressed everything so it was flat again. i wasn’t sure how to fix the pockets without taking the entire skirt apart, so i folded the gape-y excess along the bottom seam line of the pocket & stitched. then i basted the side of the pocket to the skirt. i took out maybe an inch of depth, which did successfully address the gaping. i just don’t understand what i did wrong to have so much excess fabric in the first place. was it me? was it the pattern?

i sewed the side seams with an inch seam allowance. i tried it on. it was still pretty big, but i knew the elastic back would gather in the excess & i could adjust to fit once the waistband was on. i re-hemmed (which was a nightmare–cutting down the side seams so much skewed the curve of the hem so i really struggled to get it even). then i measured the width of the front of the skirt, seam to seam, & cut the front waistband down accordingly. ditto on the back. i seriously cut a couple of inches off both waistband pieces. WHY was the waistband so much bigger then the skirt?!

then i re-installed the waistband, had some weird topstitching problems, sorted everything out, stitched the elastic casing closed, & clipped all my loose threads. boom. done. with the pockets flat & the whole thing smaller, it fit much better. i still think it might be just a tiny bit too long, but i can’t decide.

this photo makes the length look pretty much perfect.

it was cool of jared to take a great photo of me standing in front of a trash can. 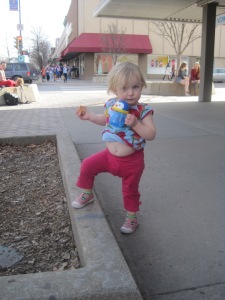 this has nothing to do with the skirt. it’s just a hilarious photo of ramona.

i actually bought this pattern with a different project in mind, & decided to make this skirt as a kind of wearable muslin, since i have so much of this viewfinder print. i’m glad i did, because i don’t think my original idea is going to work. i’m thinking about drafting my own pattern for the skirt i originally wanted to make. i’m not sure i will make this pattern again…i do like the pockets (even though i had to tweak them to fit), & the final skirt is very comfortable. i would suggest anyone else who tries this skirt maybe gauge their size based on flat measurements. the front & back total should be the circumference of your waist plus one inch for seams plus about four inches for gathering in the back with the elastic.