this is a little overdue, since i got sick pretty much two seconds after we finished, but: for valentine’s day, jared helped me finish up my sewing cabinet!

i had a cuter photo, with ramona sitting on one of my fabric bins, but then i rearranged things to be a little more user-friendly & was not adorably photobombed when i took the new pictures.

i had been working on an eight-foot buffet table we found in the basement. i stored boxes of fabric underneath & kept my machines & boxes of notions & patterns on top, wherever i happened to find room. we have a small portable ironing board that was brought out as needed. i often found myself cutting fabric on the floor or the dining room table (neither of which are at a back-friendly height, obviously) because i didn’t have enough room on the table, with all the pattern pieces & notions & scraps & manuals all over the place. 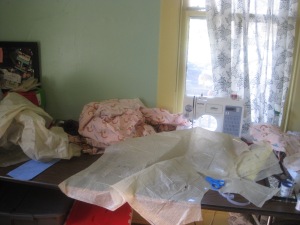 it was so confusing to me that i never had enough space despite having a giant table at my disposal. & my sewing set-up was permanent. a lot of people work on their dining room tables & have to clear their projects away multiple times a day for meals.

i wanted a table in which i could recess my sewing machine & a cutting table of an appropriate height, & now i have them! let’s go on a little tour…

the cutting table is a solid wooden butcher block on locking casters, found at the antiques mall. it has a drawer, in which i have stored my patterns. (i’m contemplating better pattern storage solutions. right now they’re all just kind of loose in there. some are in an accordion file.)

i have a big space underneath, where i have stashed most of my fabric. i sorted through all my fabric one day around thanksgiving & organized everything according to type (bemberg, flannel, wool, lace, muslin, fleece, jersey, etc). then i organized all the quilting cotton by color & print. which took about one thousand years. actually it only took four or five hours, but the ENTIRE HOUSE was covered in little piles of fabric while i bundled like with like & sorted & stored. right now i have one big bin for quilting cottons, & one for apparel fabric. muslins, linings, & lace are in the blue suitcase, & various works-in-progress are in a cardboard box. the other cardboard box is nothing but viewfinder print fabric. i told you i bought a lot of it. it actually requires its own box!

there’s a little shelf on vhe side of the butcher block that is the perfect size for extra serger thread, my spray bottle, & the iron.

the table all the way to the right is just a random end table we had laying around. we used to use it to store board games, but had to stop once ramona got old enough to potentially open a board game box & eat a pair of dice. it was by the couch until we got ramona her own little table & chairs & put that next to the couch instead. it was next to my desk in the kitchen for a while, but we never really used it for anything except piling it with random clutter we were too lazy to immediately put away. i knew i needed some kind of elevated surface on which to put the white shelf, because i didn’t want to give up any real estate on the cutting table for it, & i couldn’t keep it on the floor because that’s just too tempting for toddler terrors. oh hey! how ’bout that really nice end table we don’t use? perfect!

the shelf itself holds all my storage reference books & drawers full of thread, bobbins, needles, assorted machine feet, bias tape, lace trim, snaps, scissors, buttons, etc etc. all of that stuff is mostly organized-ish, but could use another once over & a bit of pruning. i somehow keep acquiring old spools of bias tape & it’s kind of taking over all my notions storage. my friend rebecca also talked me into buying an entire huge ziplock bag full of various spools of thread, which takes up a lot of space. i thought about maybe getting some pretty glass jars & making one of those displays of old wooden spools of thread in jars, but…i’m not actually a huge fan of knickknacks, & that kind of thing ain’t nothin’ but a knickknack. i’m a lot more likely to just use it. maybe someday if we have a bigger house & i have a little more space for uselessness…

the sewing table itself was also scored at the antiques mall, for a mere $20. & it came with a pretty gorgeous vintage sewing machine. i am not especially interested in learning a vintage machine right now though, so i took it out & we installed a plywood platform in the opening on which to rest my modern machine. for christmas, jared ordered an acrylic insert to fit the remaining gap between my machine & the opening in the table. it’s about an eighth of an inch off being a perfect fit (my fault, i did the measuring & misgauged the diameter of the curves around the opening), but it’s close enough to work.

to make the platform, we measured the inside opening & had a piece of plywood cut to fit. we then had to cut a rectangle out of it at home to accommodate the table’s knee pedal press function. jared used a circular saw for that, with…satisfactory results. we measured the height of the platform, which had to be pretty exact so the machine would sit at the right height to be flush with the acrylic insert. that took a lot of trial & error. finally jared just laid under the table & held the platform & i put the machine on top & we shifted until we got it right. jared drew a line all around the platform & we decided we’d sink some anchor holes & hope for the best.

we used 2.5″ L brackets & the screws that came from the package. we had to use shorter screws in the front of the table because the wood there is a lot thinner. jared put anchor holes in the platform & put in the screws & drilled anchor holes right through the holes in the brackets to place the platform inside the table. we had a few misfires as far as thinking we’d put the brackets in upside down, & taking them all out & turning them around, & then realizing we were right the first time, but we got there in the end.

the bench came with the table. the lid lifts off so there’s storage inside. i’m still trying to figure out what the best use of that space is for me.

the art on the walls is by ramona.

future projects: i’m planning to sew a new cover for the bench. i’m also planning to make a pressing surface that is the size of the top of the cutting table, just from plywood & a towel covered with pretty fabric. it will make pressing yardage prior to cutting SO much easier. i’m thinking about painting the cutting table & sewing table. i will almost certainly paint the cutting table at some point, because it’s just plain untreated wood. the cabinet however, is antique & solid wood. i kind of feel like it’s a crime to paint it, but…we’ve already altered it by drilling it full of holes. i also accidentally put a big scratch in the top with a metal file. & it’s mine, so why shouldn’t i paint it? we’ll see…

i’ve sewn one project with the new set-up so far (the day i got sick–by the time i was done, i had a 102-degree fever) & i think it’s going to take a little time to adjust to the new space. but i’m really excited about it!

bonus photo of ramona (on her way to hogwarts, thanks to harry potter night organized by the library a few weeks ago):