well, i’ve been a little bit quiet, huh? let’s try to catch up.

i have been doing some sewing. i made myself a cozy knit bronte top (that i am wearing right now) & cut the fabric for a second one. i’m also eyeing a glittery black knit to make a third, & to try again on getting a decent fit on the renfrew. my winter fashion concept is basically jeans, a hoodie, & some kind of long-sleeved shirt under the hoodie, so all these shirts i’m making will be covered up. but ramona is really into zippers now & likes to unzip my hoodie in public & demand that i “take [my] coat off,” so it doesn’t hurt to have something better than a tissue-thin thermal full of holes under there.

i also made ramona a little tote bag with the idea that she could use it to carry her own necessities when we fly to boston next week. it turned out kind of small though. i’ll post about that soon.

a week into december, i realized, holy shit, christmas is less than three weeks away! we were kind of idly planning to do another holiday photo card with ramona sitting on santa’s lap, but we had not gotten around to hunting down a santa. & we were swiftly running out of time. & jared was still harboring dreams of our holiday card featuring the whole family in matching pajama pants. but he didn’t think it would happen because “you have to make three pairs of pajama pants, which is gonna take like a week right there.”

i did already have the fabric, & had traced off the different sizes we’d all need on to my new best friend, swedish tracing paper. not sure why i resisted splashing out on it before? it makes tracing off patterns SO much easier. if there’s one thing i have learned about sewing, it’s that having the right tools for the job really makes everything so much easier & more fun. & it was only like $12 for 75 yards. or something.

so i cut out all the fabric while ramona ate lunch & i started sewing during her nap. i broke for my own lunch & to read people on the internet being mad about how will got robbed on “america’s next top model” (co-signed) & then went back to sewing. within a few hours, i had three pairs of pajama pants. ramona woke up just in time to try hers on so i could mark the hem.

we all put on our new pajamas & whatever bright red tops we had. jared has a red hoodie, i wore this weird sweatshirt i’ve had since i was like seven years old, & ramona wore a long-sleeved top handed down to her by jared’s advisor, who has a slightly older daughter. i set the timer on my camera & we tried to take some photos.

we did eventually get one that was quasi-usable, & in fact, i am hoping to get all our cards addressed this afternoon during ramona’s nap, but we also have a lot of terrible outtakes.

ramona is crying because jared did not want to let her play with a cat toy in the photo. i don’t know why, as it was the only thing bringing her joy in this moment. but she is crying & trying to escape. the less said about my face, the better. 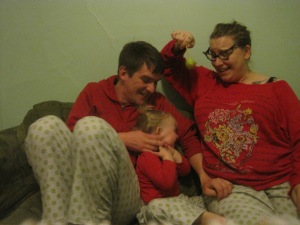 jared tried to trick ramona into smiling by tickling her, & i apparently had a mental break & momentarily confused my cat toy-obsessed human child with an actual cat. i think i’m trying to get her to jump up here & show off her pants. obviously this photo sucks.

what is even happening here?

it’s truly amazing, the quantity of photos in which jared has crazy eyes. he’s so normal-looking, even handsome, in real life. & he usually photographs very well. after every round of photos, he was like, “okay, i just need to look normal next time,” & then he’d do this again.

anyway, we did get a couple of photos where i don’t have eight chins, jared doesn’t look like a serial killer, & ramona is at least not blurry. i put together a card & ordered from tiny prints & i swear no one is paying me to say this, but shipping was so fast! the cards arrived three or four days earlier than tiny prints predicted! unfortunately, they showed up the same day that i finally caught the cold ramona had been incubating all week. so they have yet to be addressed & mailed. (i have nice handwriting, & jared had illegible chickenscratch, so most envelope-addressing in our household falls to me.)

ramona also turned two since i last posted, but that’s another story for another day. suffice to say, i am going to do my best to have my next kid in the spring or early fall, because having a winter baby means you have to go to shitholes likes indoor playgrounds for their birthdays, & those places are the worst. to say nothing of the confusion that results in having one’s birthday so close to the december holiday season. i always suspected that might really blow for people, & it does.

oh, in case anyone wondered, the pattern i used for these jammies is the same i used for the others i’ve made: the pajamas for everyone pattern from “weekend sewing” by heather ross (which i got free from the library). it continues to be absurdly long. ramona’s waist is 19 inches & i cut the smallest kid size for her, which fits kids with 20 to 24-inch waists. i had to cut off more than half the length because her little inseam is only 11 inches. i was worried that they weren’t going to work out at all because one half of the flat pattern was bigger around than any other pants she owned. but when the waist is gathered up with the elastic, a multitude of sins are (is?) resolved. i gave her a very deep hem so i can just let it out as she grows taller. she’ll be able to wear these jammies for years, probably. jared’s fit perfectly, & since i actually paid attention to what i was doing & cut two fronts & two backs & sewed them together accordingly, mine fit really well too. my first perfect makes? maybe on jared’s. ramona’s have one little tuck in the hem that i could not fix, & mine have just a tiny bit of selvage peeking out of the side seam. but whatevs.