i told jared a while back that i hoped to eventually build my self-sewn wardrobe to the point that i could wear something i made myself every single day. he observed that i would only be able to do that if i made myself some pajamas, since i go for entire days sometimes without changing out of my jammies. haha, very funny, but i realized he had a point.

hard to believe i’d never made pajama pants before. that seems to be an intro project for a lot of people learning how to sew. i know people who have only ever sewn a pair of pajama pants. maybe it’s because i already have a fairly extensive pajama wardrobe (see above, re: i love pajamas), but i hadn’t felt the urge. a few of my pajama pants recently gave up the ghost in quick succession though, & winter is coming, & i figured, what better way to celebrate my appeal & the recognition that i have legally disabling depression than by sewing up some new flannel jammies?

i got the fabric at the local indie quilting shop downtown & the pattern is from heather ross’s book “weekend sewing”. because the pattern is from a book, i had to trace it off. & since it’s big, because it’s pants, each leg required two separate pattern pieces joined together. ugh. tracing off the pattern took an entire hour. then i got ready to cut my fabric & realized there was no way i had enough. i looked online & discovered errata for the book, indicating that adult-sized pajama pants require two & a half yards of fabric instead of the two & a quarter yards i had bought. & to think that i usually over-buy!

i wound up cutting everything out of a single layer. i got three of my four required pant pieces that way & then i sewed my leftover fabric together & cut my fourth out of that. so there’s a seam running across the back of one pant leg on the finished pants. but the fabric is so busy, it’s barely noticeable.

once i actually moved on to the sewing, things went pretty fast. there are just five seams, plus making the casing for the waistband elastic, & then hemming the legs. i finished all the seams with my serger. the finished result was pretty snug through the hips (i think i will add a little extra to the seams there the next time i make these), & crazy long. which is weird because i have pretty narrow hips relative to my waist, & fairly long legs. but whatever. i cut a few inches off the bottom & hemmed & they’re perfect now.

try to ignore the filthy kitchen behind me. jared made some kind of sweet potato hash for dinner last night, so there were sweet potato peelings everywhere. plus the usual toddler mess. ramona kept petting my legs because she thought the flannel was “soft like a cat”. 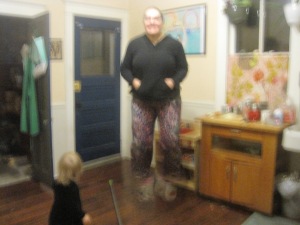 i tried to get jared to take a picture of me leaping into the air & clicking my heels together, but instead, i just looks like i’m being raptured.

i wore these pants to bed last night & they were great! i’m kind of surprised that i bought something navy because i’m really not into navy, but…shit happens, i guess. maybe navy is starting to wear me down. i don’t know what’s wrong with just a basic black though.

jared likes my pants so much that he convinced me to sew some for the whole family! did someone say christmas card?! so i went back to the fabric shop this morning (easier to do now that i can just turn ramona loose in there & know she will go straight for the zippers & entertain herself for as long as necessary) & selected some more flannel. i got enough to make jammies for ramona, jared, & two pairs for myself. (i love to wear pajamas!) hopefully i also have enough to eke out a little jacket for lula (the cat).

this is a fun, easy project that is helping me keep my mind off the election. i can’t believe kansas is looking at four more years of brownback. it’s easy, living in lawrence, to forget how conservative the rest of the state is sometimes. at least the sales tax-for-a-new-cop shop issue failed. sorry, kansas. you don’t get to charge sales tax on fucking GROCERIES & raise it so the cops can build a bigger jail. not gonna happen.