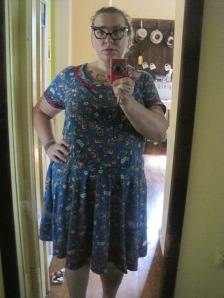 well. this is a thing that happened.

ETA: a much better-lit photo, courtesy of my mom friend rebecca (& yes, that is ramona sitting next to me, with the guitar):

this is mccall’s 6754. this is…not great, bob. i think it’s my fault. there are plenty of nice versions of this dress online. i’m not entirely sure where i went wrong. i mean…it’s all right. i’ll wear it. but this is not my finest work.

i wanted to do something with my serger, so i decided to tackle this knit dress pattern i had in my stash. i also didn’t want to use a really fancy, expensive knit in case i ruined it by not knowing what i was doing. i mean, i’ve never sewn a knit before. so i picked up a few yards of this blue floral jersey on sale at hancock fabrics. it looked okay on the bolt. i liked the blue & while i am not big on florals, it was better than just being a plain one-color dress. you know i love me a print!

i took it home & pre-washed it because i have heard that knits in particular can shrink a lot if they’re not prepped. in this case, it may have been wiser to just make the dress & wash it when it was done, because it is way too big. i didn’t do a muslin because i didn’t know what to use to muslin a knit. i only have wovens in my stash & none of them would mimic the fit of a knit. so i cut out the size that matched my measurements & did a tissue-fitting. (not that that in any way mimics the fit of jersey either, but you know.) the tissue-fitting indicated that i had to add quite a bit of length to the front bodice, as always. it’s another princess seam dress, so i did the same thing i did with the jellyfish dress & added the full length (five inches in this case!) to the middle piece & slashed the side piece to keep the side seam the same.

i had a devil of a time cutting my fabric. all it wanted to do was cling to itself, so it was nearly impossible to fold it over (a few pieces are cut on the fold) & get a stretch of fabric smooth on both sides. at one point while i was working on it, i complained about being really hot, & jared said, “maybe if you weren’t stressing yourself out over this fabric, you wouldn’t be so hot,” & i said, “i’m not stressing myself out. this is just a more difficult project than i expected.” & he said, “well, when you’re going around behaving so inappropriately…”. then i murdered him with my eyes. i’m not saying i was 100% genteel about complaining that i was hot, but it was seriously like 92 degrees that day, the air conditioning was off so we could listen for ramona waking up from her nap, & i was crawling around on the floor, trying to smooth some asshole jersey.

anyway! i eventually worked it out & started cutting my fabric. & then i realized that because i had to add so much length to the front bodice, i didn’t have enough fabric to cut the whole dress. argh! so, back to hancock for a bit more.

i finally got it all cut out & i started piecing it together. it was pretty easy because i just did a princess seam dress, & also, jersey is just really easy to sew. i did a lot of it on my regular machine because i was worried about fucking it up on my serger, since the serger cuts off the seam allowance, meaning that you can’t just pick it out & try again if you fuck it up. but i did serge the seams to finish them.

unfortunately, i did not staystitch anything. i was worried that staystitching would compromise the stretch & then the finished garment wouldn’t fit. i don’t know. i’m a fucking idiot. what actually ended up happening is that i didn’t staystitch anything, so everything stretched & the finished garment doesn’t fit. it would have been too big for me the day i gave birth to ramona. this was especially dumb because the side panels on the front are cut on the bias, so they REALLY stretched. i didn’t realize how bad it was until i was pinning the bodice to the skirt & i had numerous extra inches in my bodice circumference. i tried to ease it in, & wound up making a pair of kind pleat-ish things. uggggh. i should have made darts, maybe? i mean, nothing would have really fixed the problem & made my dress look as good as the other versions of this pattern floating around online, but the pleat things i made open into the bodice so there’s this blousy billowing thing happening around my waist…it’s just not my all-time favorite look.

also, attaching the sleeves really flummoxed me for a while. you can’t try the bodice on & get a sense of fit until both sleeves have been attached (at least basted in place), which makes it that much more complicated to make sizing alterations if they’re needed. i also used stay tape around the armscyes (not sure why i was worried about the sleeves drooping & not the dress itself?), which wound up being a giant mistake because it’s so goddamn itchy, especially in contrast to the smooth, soft jersey. i wound up trimming off as much excess stay tape as i could & enclosing the sleeves seams in bias tape. still not 100% perfect, but a major improvement.

i also don’t know what the fuck happened with the neckline. maybe that stretched as well? when i tried the bodice on to examine the fit before attaching the skirt, i was like, “whoa.” the neckline is really big. if i turned it under & hemmed per the directions, there’s no way i would have been able to conceal my bra. i wound up making a kind of faux-bias tape & using that to enclose the neckline & preserve a bit of my modesty, but folding the jersey that way when it was sticking to itself & curling on the edges…blargh. again, not my finest work. not by a long shot.

attaching the skirt & doing the elasticized waist went very well. i had a much easier time making a channel for the elastic with this pattern than i did with the miz mozelle. maybe i’m just getting slightly better at watching my seam allowances or something.

i tried the dress on so i could get a sense of the hem. (i have read that you should shorten a skirt anywhere where you’ve lengthened a bodice, & lengthen a skirt where you’ve shortened a bodice, but that doesn’t work for me since my waistline is uneven front to back. i have to try a garment on & kind of eyeball the skirt where it falls in relation to the waistline on the bodice.) as i was pinning the hem into place, it suddenly occurred to me…this thing looks like a nightgown. i think a combination of weird, flowery fabric & generally being too big…it looks like a grandma nightgown. shit shit shit.

when i got up this morning, i hemmed it & that made it look a little better. it’s funny how just a hem can make something look so much better. but it was still a little nightgown-y. my friend rebecca, from baby playgroup, had dropped off some various sewing notions for my birthday, including some red rick rack. rick rack is not something i would think to buy on my own. it’s just not really my bag at all. i had just gotten a big bag of assorted lace at the antique mall, but i knew adding LACE to this flowery bullshit was not going to do anything about the Nightgown Factor. so i pinned the rick rack along the hem &…hey! it looked better! suddenly it had kind of an easy breezy casual 70s vibe! that’s not necessarily an aesthetic i would have intentionally chosen, but it’s okay. it’s better than a 70-year-old woman in her jammies vibe, right?

i pinned rick rack around the hem, & the neckline, & the sleeves. i made a faux-placket & sewed on a couple of random heart-shaped buttons i had, left over from the time i had to replace a heart-shaped button on a very cute sweater we got for ramona at the goodwill. & suddenly the dress was a lot less objectionable. i’m still not loving the fit–i wish there was something i could do about the blousing. i thought about adding a waist tie to cinch things & cover up the weird pleat element a little, but ramona only napped for like 45 minutes today, so i didn’t have the time/energy to pursue that. maybe another day.

like i said, i’ll undoubtedly wear this dress. it’s super-comfy. i am almost embarrassed to be blogging about it because i feel like it’s such an epic fail, technique-wise. i mean…i cut shit on the bias & then didn’t staystitch it. did i have a lobotomy or something? that’s so 101. i think i will try this dress again in a heavier knit & see what happens. (& i’ll make some fit alterations before that. i suspect that part of the problem is that it’s a mccall’s pattern & they build in a lot of ease, but i couldn’t find any info on the finished garment dimensions on the envelope, so i wasn’t sure what to expect. maybe i’ll try going down an entire size?) i got some heavier black & red striped knit that drapes really nicely & does not cling to itself at all, so i think that will be fun to sew. when it’s colder out. because it’s definitely, like, sweater material, which is horrifying to think about on a day like today, with a high of 102 degrees. 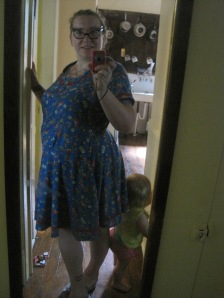 see that blousing at the waist? argh. but hey! there’s ramona! 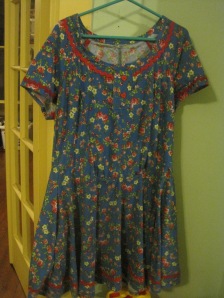 a slightly better-lit photo of the dress on a hanger. 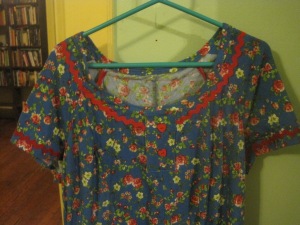 the top. is the fact that the bottom button is crooked totally noticeable? how do you not sew a button on crooked? because i seem to suck at that. 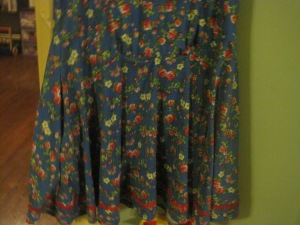 not sure what my next project will be. whatever it is, i really want to sew something that comes out PRECISE. none of this, “whoops, i guess i’ll just tuck this extra fabric in here & call it good enough,” “oopsie, not sure how that trim got totally crooked but it’s too late now!”, “oops, accidentally serged the same seam twice…i guess that side will just be a little smaller,” bullshit. this project…i don’t know, man. someone on the internet was like, “this would be a great project for a total beginner!” really? REALLY?! a knit dress with princess seams. yeah, i don’t think so. not that this was OMG the hardest ever. i mean, the parts that failed for me were pretty much totally a product of my own idiocy. maybe i’d be singing a different tune if it had come out gorgeous. oh well. i am reminded of how recently i got annoyed with a sewing blogger for remarking that her latest project was “another ‘perfect’ make,” meaning that she had not made any mistakes with it. you know…good for her, dude. it came off a bit conceited, but if i managed to make something with no mistakes, i’d probably be hollering it from the rooftop, so.