after my first foray into paper-piecing, i knew i wanted to try it again. the swimsuit pattern i used looks just like my bathing suit, which inspired me to use the design on a swim bag! going to the pool is my primary form of exercise (other than chasing ramona around, which can be very exhausting). i don’t go as often as i should because sometimes i would rather stay home & sew or hang out with ramona instead, but i thought maybe having a cute bag dedicated to pool-going would inspire me to make the effort.

off to the pool! again, we are so bad at doing these crafty photo shoots. nice elderly box fan prominently displayed in the corner, there. at least you can see my pippi longstocking tattoo here.

this bag is pretty much completely of my own design. i had never sewn a bag before, so i wanted to keep it reasonably simple, but i also wanted it to address my pool needs. it had to be big enough to fit my towel, swim shoes, & various toiletries (i try to shower at the pool after i swim so i’m not bringing all kinds of norovirus & e. coli & stuff into the house), plus my pocketbook & cell, & i also wanted a compartment to stash my glasses & hair pins while i’m in the shower. i wanted the inside of the bag to be waterproof, but i wanted pockets on the outside for the stuff that shouldn’t get wet.

so, i went to the fabric store to find appropriate fabrics. i wanted a small-scale print for the swimsuit, something kind of retro-ish. when i found this narrow stripe, i knew it was the one. i matched it with purple kona for the outside of the bag & picked up some PUL for the waterproof inside. i also bought two white zippers, four small D-rings, & a couple yards of white strapping.

the problem i had with my first attempt at paper-piecing was mainly a lack of precision when i sewed the various parts of the completed template together. this time, i was really careful to try to catch my entire seam allowance under my final stitching so nothing would be visible that shouldn’t be. it’s still not 100% perfect, but it’s much better than my first try.

i also got a little wooden finger presser thing (i forget what it’s actually called) & went over each seam as i went. that made everything lay more smoothly & helped everything come out even.

i spent an entire evening trying to figure out the design of the bag. i must have read a hundred tutorials on sewing with PUL, making zipper compartments, attaching D-rings, etc. i’d never done any of this crap before. i finally sketched out a rough design & wrote up every element of what needed to be cut, the dimensions, etc.

yesterday when ramona went down for her nap, i got to work. i sewed extra purple panels to my paper-piecing to make the front of the bag, & a panel for the back.

the pocket on the back is made of four pieces of fabric: one striped piece & one purple piece for the front, with the zipper, & two striped pieces for the lining. it took a lot of fiddling to figure out how to make this pocket. i riffed off a tutorial i found for a hidden zipper pocket, which is sewn directly into the lining or the outer material of a bag. but i was really attached to somehow turning this “hidden zipper pocket” into an open pocket for my glasses too, so somehow i cobbled that together.

basically i made a zipper pouch & sewed it to my bag, leaving the top open. & i lined it all with the same striped material i used for my swimsuit decoration!

i wanted to make a pocket on the inside to stash shampoo, conditioner, etc, but i didn’t want to sew the PUL too much because every place a needle goes through it is a spot where the waterproofing is compromised. not that that matters SO much with a pool bag. it matters more with, say, a diaper wet bag. but still.

i wound up cutting one bag-sized piece of PUL & one that was equally as wide but a foot longer. i then folded it up twelve inches & folded the fold down six inches to create the pocket. i did french seams all around to seal everything.

ultimately, the pocket is kind of not deep enough to be really effective. there was a probably a better way to do this part. but it’s functional enough.

also, sewing through multiple layers of PUL was a major pain in the ass. i did use a walking foot, but my machine was still dropping stitches left & right. i finally tried a topstitching needle with the tension turned down to 2 (ordinarily it’s set at 4). that did the trick. i also used wonder clips to hold the layers of PUL together, since i didn’t want to put pins in them & make a bunch of holes.

i made tabs for the D-rings with strapping, but when i went to make the actual straps, i was worried i didn’t have enough to make them as long as i wanted. & the fabric store was closing in ten minutes. jared suggested i make temporary straps out of the strapping i had, by attaching them with snaps instead of sewing them. so that’s what i wound up doing, only to discover that the straps actually were long enough. i asked the clerk at the fabric store what needle i should use to work with the strapping & she was like, “just a universal needle works for me.” i broke two needles that way. i personally would suggest a denim needle, & go SLOW.

& then it closes across the top with a zipper. which i probably didn’t install totally correctly. i probably should have sewed it one before i sewed by side seams, so i could properly enclose the ends of the zipper, but i was loosely working off an online tutorial that i misread/misunderstood, so that didn’t happen. oh well. the zipper works & to the the untrained eye, it probably looks more or less okay. so it’s fine.

also, i can’t believe it took me until now to think of using wonder clips to hold a zipper in place while i sew it! pins can be so fiddly. 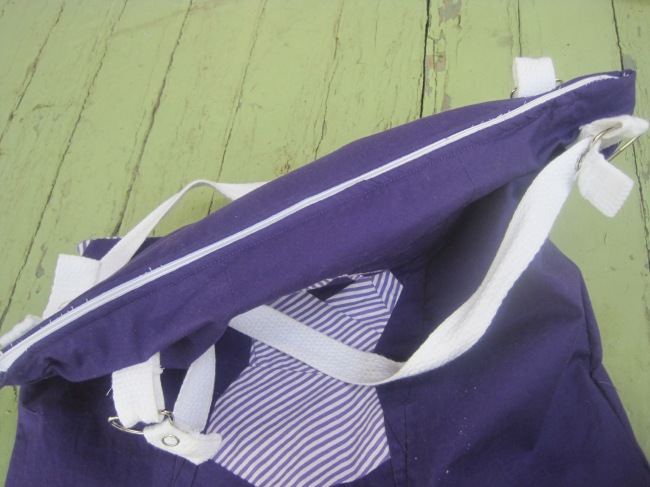 i took it to the pool this morning on a trial run & it worked great! it fits all my stuff, & it didn’t leak at all, even when it contained a soggy towel & sopping wet bathing suit & swim shoes. it fits over my shoulder & it looks cute. it’s not the fanciest bag the world has ever seen, but i’m pretty proud of it!

i’m gonna go ahead & link this up to sewjo saturday.