ramona had a poop download yesterday (sorry, non-parent readers, but poop does indeed sometimes happen), & when i returned from dealing with it in the bathroom, i found her sitting in my sewing chair! she has climbed up into our landlady’s patio chairs & on to a bench at the playground, but i didn’t think she was big enough to climb into a regular chair for some dumb reason. the rest of the day was insanely easy. she just kept climbing up into my chair, where she would sit, happy as a clam, for literally an hour at a time. she wasn’t making a mess, she wasn’t begging for stories, she wasn’t tormenting the cat. she was just sitting in a chair. i was like, “fuck yes, this rules.”

fast forward to today. today she climbed on to my desk chair. & from there, on to my desk. i found her perched up there, gnawing on my journal. not cool! i gave her the boot & she climbed back into my sewing chair. & started reaching for my sewing table, & specifically, the lovely shiny things on the sewing table, such as my very sharp embroidery scissors, my even sharper sewing shears, my pin box, & my ridiculously expensive computer. (i was researching the cambie dress by sewaholic, which is going to be my next dress project. read on for more on that later in this post.)

i gave her the boot again & she proceeded to climb into jared’s dining room chair & then on to the dining room table, which was littered with my kind of expensive special order writing pens, a dirty diaper (just wet, don’t worry) i hadn’t yet put in the hamper, & a vase of flowers. terror baby! 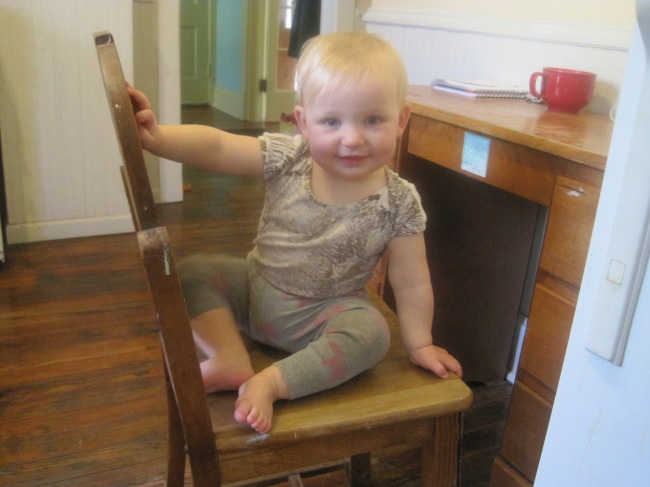 there’s probably a fairly simple solution: we must always keep our chairs pushed in when we’re not using them. obviously she’ll eventually learn that she can pull them out & position them to climb to forbidden heights, but hopefully it’ll take her a while. i will also have to train myself to put away potentially dangerous sewing items or things like pens & journals that i don’t want her ruining when they’re not being used. when i first started sewing, i was awful about just dropping thread & little snips of cloth & even pins all over the floor. but obviously none of those things is good to have on a floor with a baby that stuffs everything in her mouth, & i trained myself to immediately put pins back in the box & to brush threads & scraps to the side instead of the floor. it’s just a matter of developing a new habit.

i left ramona with jared for an hour yesterday while i ran downtown for an appointment, & when i came home, she was in a completely different outfit. i said, “oh no, did she sog through her outfit?” & he said, “no, i took her outside to play & she jumped in the pond.” !!! our landlady, who lives right next door & shares a yard with us, is really into birding, & she has two small, shallow ponds in the yard that are basically overgrown bird baths. they are surrounded with decorative rocks & ramona likes to pick the rocks up & throw them into the water. & i guess this time, she decided she’d like to follow the rocks! the water is more shallow than her bath, & jared was right there, so she wasn’t in any danger, but she still just dove in fully-clothed! shoes & all! jared said he had to give her a bath, since obviously a glorified bird bath is probably full of bird poop.

& then our babysitter (jared’s very generous colleague, allison) showed up to take over & we were able to go on a real date! yesterday was our anniversary: seven years. it was also the first time jared has ever actually been kind of excited about anniversary. every year before this, he’s been like, “well, two years is when it really counts…actually, three years is the big one…anniversaries don’t really matter until four years…” etc etc. but i guess in jared’s world, seven years is when you really know you’re serious. he was perhaps more excited than i was! we just went out to dinner & tried to see “the grand budapest hotel,” but we missed the first ten minutes. so we decided to take in the later showing & go have a beer in the meantime, but we wound up having such a nice time sitting around & talking at the bar that we just skipped the movie altogether. we never get to just sit & talk anymore! it’s just baby baby baby work work work until she goes to bed at night, by which point we’re both so exhausted/overwhelmed with all the work we didn’t get to because of the baby that we still don’t really end up hanging out, really.

we had a very serious conversation about buying a new mattress. it went like this.
ciara: “i can’t wait until it’s time for us to buy a new mattress.”
jared: “that will be really nice. i feel so sore when i wake up in the morning.”
ciara: “me too. but that’s because i have arthritis. & am also old. but i’m scared of mattress places that advertise easy financing. i’m scared of buying a mattress so expensive that we have to have financing. we didn’t even need financing for our car. but i guess we spend more time sleeping on our mattress than we do sitting in the car.”
jared: “yeah, & places that sell you a mattress without financing seem really sketchy. i think it’s time to start saving up. maybe we should make a timeline.”
ciara: “i can’t wait until people ask how we spent our anniversary. ‘we decided it was time to get a new mattress. but not in a sexy way. just because we feel stiff in the morning. again, not in a sexy way. i really want to stress that no part of our anniversary was remotely sexy.'”

so, sewing stuff! i altered the sleeves on my mix tape dress a bit (during one of ramona’s naps). i cut the elastic for the sleeve hem a little too big, so i couldn’t push it up if i wanted. i cut out an inch or two of stitching to pull the elastic edges out of the casing & trimmed about three inches off. i sewed it all back up again & now it’s perfect! i wanted a puff sleeve effect & that’s what i have now. i wore it to toddler gym this morning & another mom immediately ran over to me & was all, “i love your dress! did you make that? you are so talented!” i told her it was only the third dress i’ve ever made & i’ve only been sewing for a year & she said, “that’s so inspiring! maybe i should try sewing too! i’d love to be able to make something like that!” now THAT is the kind of reaction i live for!

like i said, my next dress project is probably going to be the cambie by sewaholic (http://www.sewaholicpatterns.com/cambie-dress/). it’s a very sweet dress: gathered sleeves, a sweetheart neckline, & of course i’m doing the full skirt silhouette. very sugary, very girly. a lot of other people who have made this dress have tried to choose fabrics that contrast with the femininity of the design, but i say, go big or go home. so i’m doing it up in this fabric: 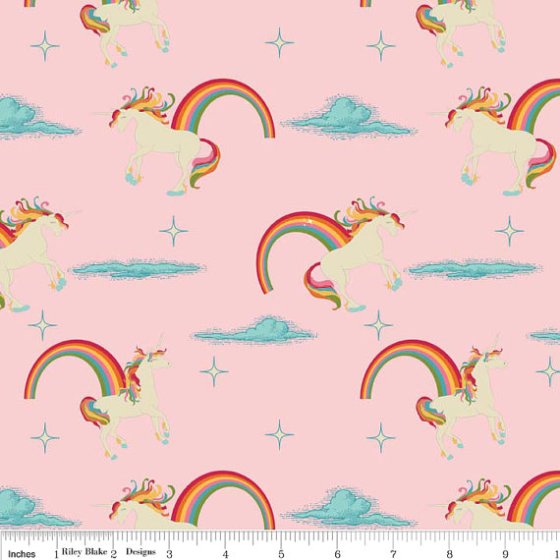 i sewed up a muslin yesterday (again, during ramona’s nap–i like to just put on a podcast or a TV show in the background & sew while she naps), & it was just a HAIR too tight in the biggest size. sewaholic is an indie designer that is specifically cut for the “pear-shaped figure,” & i have written before about how that is not my fit issue. my bust measurement is larger than my hip measurement, & my bust measurement is slightly larger than sewaholic’s largest offering. bummer. luckily, i have been combing the internet for blogs written by plus-sized seamsters, to get tips on how to fit patterns written for smaller measurements, & i picked up a copy of “the complete photo guide to fitting,” which has a WEALTH of information on fitting. the cambie pattern was really just a little too snug–i could get it zipped, but i don’t think it’s realistic for me to wear a dress that tight & take care of a baby or be totally comfortable, & what’s the point of sewing for myself if i’m not making something i can actually wear in my day-to-day life? i’m not sure what the fix is, but i’m going to start by adding just a little extra width at the side seams & see if that solves the issue. i don’t think i’ll have to make an actual full bust adjustment.

i have also already picked up the fabric & selected the pattern for my next dress after that. two words: BACON DRESS. here’s a sneak peek: 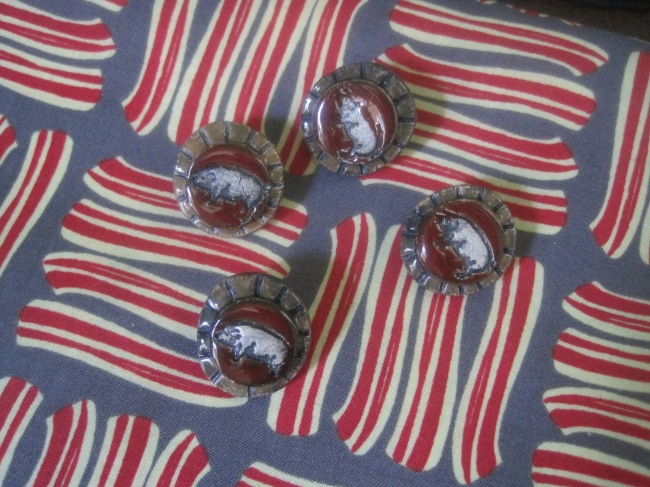 4 thoughts on “ramona climbs & i sew”