hello, blog! i have seriously been neglecting you.

so what’s new with ramona these days? she turned one a couple of weeks ago. we had a little birthday party where we served thanksgiving leftovers, cupcakes, tortilla chips, & beer. we dressed ramona up in a little colorblocked dress i bought her specifically for the occasion. i still think she looks strange/not like herself in dresses. my friend jenna, whose three-year-old daughter LOVES dresses & anything pink, says that dresses start looking better on kids once they move on to standing/walking. but ramona is still a crawler, so dresses ride up over her butt & it just looks weird.

at her one-year check-up, her pediatrician became concerned that ramona does not stand or try to walk. i thought she was jumping the gun a little, especially given ramona’s prematurity. she might be the tiniest bit slow with her gross motor stuff, but every kid has their strengths & weaknesses. still, i gave tiny K a call (they are the early intervention people in kansas) & they came out to assess her. they decided that she is a bit delayed, even with the prematurity, & that they’d start giving her some occupational therapy. in the meantime, they gave us a few tips on things we could do with her to get her used to bearing weight on her feet & supporting herself in a standing position.

so we implemented their suggestions & she literally pulled herself up to standing the very next day. she’s only done it the one time, but she can go from sitting on my leg to standing, no problem. & if i set her into a standing position holding on to something (the coffee table, the couch, a chair), she will stand there until her legs give out. tiny K is going to work with her anyway, just to make sure she keeps making progress, but i’m really not stressing about any of it. (though i would LOVE to never have another person say, “my niece/my neighbor’s grandson/this kid my dentist knows didn’t start walking until s/he was 18 months old & s/he’s fine!” first of all, the concern was with standing, not walking. second of all, i don’t care about some kid i don’t know. third of all, just because one kid did something kind of late but is fine doesn’t mean that no other kid’s delays ever indicate an issue. i don’t know. had i only heard like two or three stories like that, maybe i wouldn’t care as much, but EVERYONE wants to share this kind of crap with me & i’m just plain over it.)

ramona has also dropped down to just one nap a day. which is probably the biggest contributer to me failing to blog very often. i had a really hard time coping at first. had she been born on time, she wouldn’t even be eleven months old yet! this is WAY early for her to drop a nap! but some kids make the switch earlier than others, & i guess this is an area where ramona is a bit advanced. (ugh.)

i’ve adjusted though. it sucked at first because i was in denial & would try to force her to take a second nap. for any non-parents reading this, allow me to make clear: you cannot force a baby to sleep. trying is a fool’s errand. she was miserable, i was miserable. eventually i just accepted that she only naps once a day now. i adjusted her schedule a bit so i don’t try putting her down so early & she started giving me longer naps. i started a splinter playgroup from her regular playgroup for the babies that are making the switch, so i still get my extremely necessary time with other moms (& ramona gets her time with her baby friends). i dropped my afternoon pumping session so i am no longer attached to a breast pump while a baby crawls around the house on a relentless search for power cords & the loose change that jared can never seem to remember to pick up. i’m even kind of liking it because i no longer have to try to stuff all of our errands into the window between the morning nap & the afternoon nap. once she wakes up from her nap, i know we’re free to do what we like together for the rest of the day.

but around the time she made the nap switch, she also stopped taking bottles from jared. people have been telling me for a year, “i feel so bad for you, having to pump. it’s twice the work because you have to pump & you have to feed her!” & i was like, “huh?” i mean, i do have a partner & he does have arms. so i pumped & he fed her a lot of the time. but she will no longer really take bottles from him. he got into the bad habit of just not giving her bottles when he got home from school, & i think now she thinks he is “party dad”. mom is the one who gives her bottles & puts her down for naps, but if dad is around, clearly it’s time to go for piggyback rides & have lots of stories read to you, right?

it worked out okay thought because i was sick & tired of giving her baths, so i negotiated for jared to do all the baths & i will do her bedtime bottle. since my new pumping schedule doesn’t involve a pre-bedtime pump (i’m still getting up at 1am to pump; i tried dropping that one instead, but i actually missed it too much–i like the quiet time), this is working out great. & since ramona associates me with getting a full belly, she’s been pretty good about sucking down her bottle & passing right out. she’s been sleeping through the night really well lately. (i just cursed us all by writing that.)

i do think she needs an earlier bedtime now that she’s down to just the one nap though. so we’re going to bump her bedtime forward while we’re in boston for christmas. 8pm boston time is 7pm kansas time, so that’s perfect. it will feel like a regular day, but we’ll actually be gaining an evening hour for ourselves.

jared also kind of insisted that we take ramona for a photo op with santa claus for a holiday card. well, let’s be real: a christmas card. i don’t really celebrate christmas, nor do i know exactly how i feel about santa claus, but jared was so enthusiastic for this idea that i went along with it. our first attempt at a santa photo was a disaster. not only did ramona cry, but even the crying photos came out dark & blurry. plus jared & i got into a MASSIVE fight because he thought i was being bossy when i told him not to stand in front of ramona if he actually wanted me to take a photo of her, & i thought he was just kind of being an all-purpose dick for giving me the silent treatment. i took her out again the next weekend & got some much better photos in a well-lit department store. she even smiled in some of them! 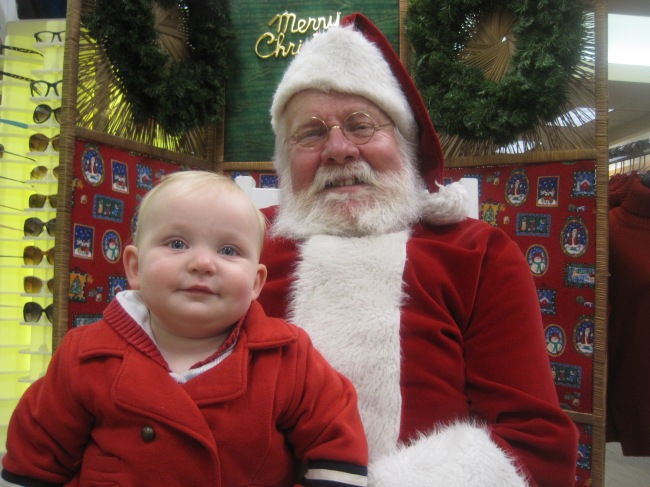 the santa is perhaps a bit creepy though, no?

2 thoughts on “update from the baby trenches”