sorry i have been incommunicado! taking care of a baby is full-stop bananas. i often find myself thinking about how caring for ramona is about nine billion times easier than i expected it to be–really! but that doesn’t mean it’s not ridiculously time-consuming. i think it’s easier in terms of stress, anxiety, money, sleep, & job satisfaction, if you will, but it’s crazy as far as time goes. which, honestly, isn’t a bad trade-off. i was telling a mama friend the other day, i feel like i am just never doing anything except for caring for ramona or racing around trying to get other things done while she’s sleeping or while jared has her. in some ways, i am more productive than i’ve ever been, simply because you can get so much done when you’re firm with yourself about not having time to procrastinate. but in other ways, i don’t have much to show for the productivity because so much of it is stuff like “wash diapers…again,” or, “give ramona her multivitamin,” or, “pump breast milk for fifteen minutes & then wash pump parts & ramona’s bottles”. over & over & over.

it’s okay though because i don’t mind doing any of this stuff (not even pumping–people complain about pumping so much, saying that it’s tedious or painful, but i don’t mind it at all; it’s not painful for me, i’ve never had problems with cracked or bleeding nipples, & i read while i do it, which is a very pleasant way to pass the time), & i know it’s all a stage anyway. before i know it, ramona will be eating solid foods & eating less & less breast milk until finally she doesn’t take any breast milk at all. i can’t even fathom what my life will look like when i’m not pumping several times a day & constantly washing bottles, but i suppose it will involve more toddler activities like story hour & trips to the playground.

i also rather expected to be an anxious new mom. one of my good friends had a baby several years ago & wound up diagnosed with post-partum anxiety disorder. prior to having her son, she had been a pretty chill lady. she made movies & avant garde high-concept knitting projects & kept riding her bike until just a few weeks before she gave birth. she fashioned her own maternity sweaters out of regular sweaters combined with a scarf wrapped around her exposed belly during the wintertime & seemed to find the time to make some kind of delicious meal centered around crazy vegetables i’d never heard of before (which she grew herself in the backyard) every evening, even though she had really severe morning sickness. she even wrote a zine while she was pregnant. she had a natural birth at home in her bedroom &…then she got really anxious.

i am already prone to anxiety & didn’t have my shit nearly as together as this lady while i was pregnant. i spent all seven-ish months nesting & panicking about money & making super-elaborate to-do lists & indulging all of my worst OCD tendencies & eating chicken fingers from long john silver’s. & then ramona was born & i’m like…okay. this is fun & easy. my life is awesome. is it SUPPOSED to be this good? i still make elaborate to-do lists, but i’m not as obsessive about them anymore. i know it’s wildly unrealistic to think any list is ever going to get completed, so i think of them more as reminders of things that ought to get done eventually. & seriously, i have to remind myself to do stuff like eat lunch, because i will otherwise get sucked into reading ramona stories or trying to entice her into smiling at me, so the lists are good.

i don’t want to say that jared is “helpful,” because that implies that ramona is my responsibility as the mommy & any child care jared provides is somehow something that i should be doing. i don’t know how to phrase this without sounding braggy so, i’ll just say it: jared & i have worked out pretty much as close to an equitable division of parenting responsibilities as i could imagine. & it has been AWESOME.

at the risk of incurring the wrath of any hardcore breastfeeding advocates that are reading this, i think it really helps that i’m not breastfeeding. she gets breast milk from bottles exclusively. i try her at the breast every now & then, just to see if she has any interest, because it would be easier if i could do my share of the feedings straight from the tap (no bottles to wash), but it hasn’t panned out. which is fine. i had fully intended to exclusively breastfeed & do child-led weaning while i was pregnant, but…i also intended to give birth to a full-term, healthy infant, you know? sometimes shit doesn’t work out. although i found ramona’s birth & first month of life in the NICU really traumatizing at the time, i can now look at it as an exercise in realizing that there is no perfection in this parenting game. you can have intentions, but you’re kidding yourself if you think you can have a plan. & for someone who has always been a really intensely controlling planner, this has been rather freeing. i actually look forward to getting out of bed (or off the couch) every morning & seeing what kinds of new adventures this little baby has in store for me.

she is now ten weeks old. she had her two-month vaccinations on wednesday (a week later than we planned, due to the fact that she & i both had colds last week–which was a big milestone for me! my first time caring for a sick baby while i was also sick). they did  weight check on her & she tipped the scales at nine pounds, nine ounces. that’s more than double her birth weight! well done, ramona! she also peed all over me, the scale, the examination table, & the last fresh diaper in the diaper bag. who knew one tiny baby could hold so much pee?

i’m going to try to update more frequently, & not always just about ramona. probably usually about ramona, but i do have other thoughts on occasion. 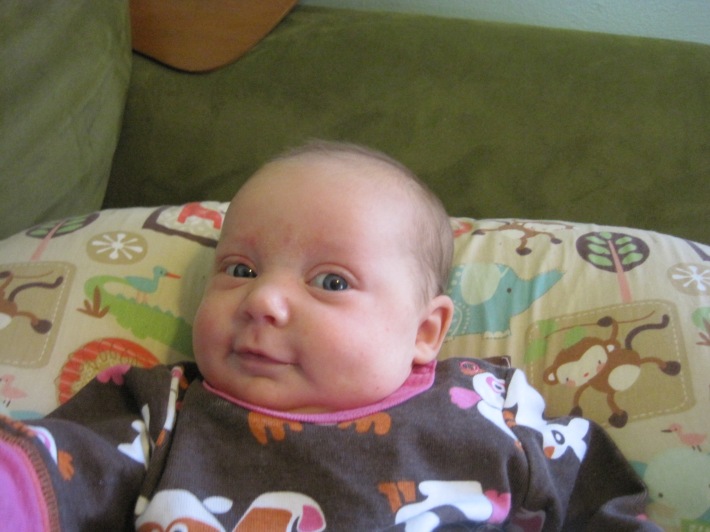 2 thoughts on “state of the baby address”